In cyclone’s wake, UN appeals for $20 million to help affected populations in Madagascar

UNICEF Madagascar
Women and children displaced by cyclone Enawo shelter in a classroom in the Sava region of Madagascar.
23 March 2017

The United Nations and humanitarian partners are appealing for $20 million to address the devastating consequences of Cyclone Enawo in Madagascar.

The United Nations and humanitarian partners are appealing for $20 million to address the devastating consequences of Cyclone Enawo in Madagascar.

“Despite the fact that 200,000 square kilometres covering half of Madagascar’s 22 regions have been affected, the country will not be left behind,” said Bary Rafatrolaza, Deputy Foreign Minister of Madagascar, in a news release from the UN Office for the Coordination of Humanitarian Affairs (OCHA).

“We are working closely with national and local authorities to meet the needs of those affected by the storm,” said Violet Kakyomya, UN Resident Coordinator in Madagascar, commending the Government both in evacuating people endangered by the storm before its arrival and in mobilizing the national and international response to the cyclone.

Enawo struck the coast of Madagascar as a Category 4 cyclone on 7 March, causing extensive damage due to high winds and flooding in north-eastern parts of the country. Between 8 and 10 March, the cyclone traced an arc nearly the length of the island nation, bringing heavy rainfall and flooding to central and southeastern areas.

At least a quarter of a million people in the worst-affected areas require urgent life-saving humanitarian assistance and protection in the storm’s wake. The Government has declared a national emergency and requested international support.

Some 20,000 families who lost their homes need emergency shelter and more than 100,000 children whose schooling has been disrupted need temporary learning spaces.

Up to 85 per cent of planted subsistence crops were lost in some areas, while more than 1,300 wells – the major source of household water – are flooded and contaminated. More than 100 health centres and 3,300 classrooms were damaged by the cyclone.

Of the nearly 250,000 people who sought shelter in evacuation centres during the storm, more than 5,300 of the most vulnerable have no home to return to and remain in displacement sites. 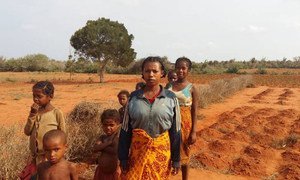