FEATURE: Humanity at the core as UN readies for first-ever Ocean Conference

UNICEF/Sokhin
Mereani, 29, and her children sitting on brick wall of what used to be their home in Fiji. Their house was just a few metres from the shoreline and suffered extensive damage during strong storm surges at the height of Cyclone Winston.
22 March 2017
Climate and Environment

Over a year ago, on 20 February 2016, Tropical Cyclone Winston made a category 5 landfall along the north coast of Fiji's largest, most populous island, Viti Levu, killing at least 44 people, and grounding flights to and from the Pacific Island nation.

"It was one of the strongest cyclones to have hit any country in the Southern Hemisphere," recalls Mr. Semi Koroilavesau, Fijian Minister for Fisheries. "That was quite catastrophic for Fiji and we are still recovering from it," he adds, sombrely.

Mr. Koroilavesau was speaking recently at a panel discussion on the margins of the first preparatory meeting – convened by the President of the United Nations General Assembly at the UN Headquarters in New York – for the first-ever UN Ocean Conference, to be co-hosted by the Governments of Fiji and Sweden, from 5 June to 9 June 2017.

"Our ocean is warming up and changing the pattern of our main product, which is tuna," said Mr. Koroilavesau underlining the significance of the ocean to the Fijian people.

"The migratory pattern has changed because of the conditions of the water. The degradation of the water is also depleting our resources and creating a lot of havoc in our ocean," he told the high-level panel, which included Peter Thomson, President of the UN General Assembly, Isabella Lövin, Deputy Prime Minister of Sweden, and Wu Hongbo, UN Under-Secretary-General and head of the Department of Economic and Social Affairs (DESA).

"Fiji has about 320 islands. Ocean is quite an important item to us both in our daily lives and… also as transportation between the islands," said Mr. Koroilavesau. 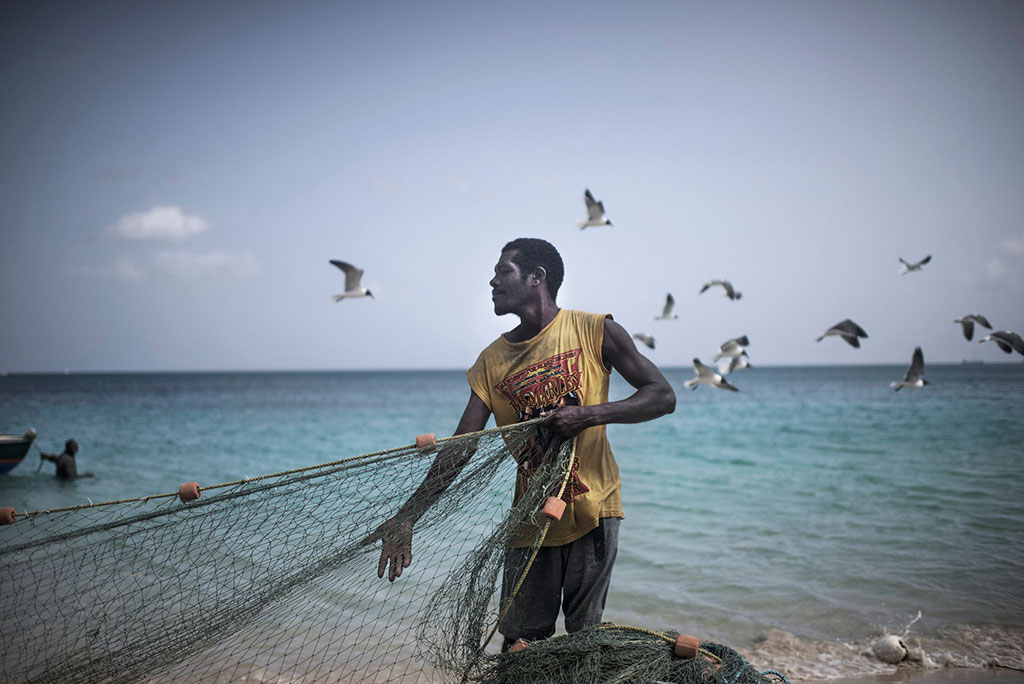 A fisherman in Grenada hauls his net ashore hoping to catch fish from the Caribbean Sea. Photo: UNEP/Kadir van Lohuizen/NOOR

In the run-up to the June Conference, four themes will shape the focus of the preparations that, according to the President of the UN General Assembly, "will lay the foundations upon which the Oceans Conference will stand."

"Our efforts at this time and in the years ahead, will determine whether our children, and those who come after them, will know the joy and the sustenance of the oceans bounty that was provided to us in our youth. Let's not deny them that bounty," Mr. Thomson had said earlier, in a message that resonated strongly with the theme for the month of February, which is People and Oceans, with a focus on livelihoods, tourism, food security, maritime transport and trade.

"Whether you look at the declining fish stocks that are reaching a tipping point, or the ocean acidification level or whether you look at the level of plastics in our oceans, I think any sensible person can conclude that time is running out fast and we need to take action fast," said Mr. Thomson, during the preparatory meeting.

SDG14 and the whole development agenda

Under-Secretary-General Wu Hongbo underlined the nexus between oceans and people, especially in the context of Sustainable Development Goal (SDG) 14, which has to do with conserving and sustainably using the oceans, seas and marine resources for sustainable development.

"When we talk about SDG 14, we are thinking about navigation in the sea, we think about catching fish in the sea for food, we are thinking about doing tourism, but that is not all. Health of the sea and sustainable use of marine resources have a direct impact in the implementation of the many SDGs," noted Mr. Wu, calling for voluntary commitments to implement Goal 14.

Ahead of the UN Ocean Conference in June 2017, UN chief of Economic and Social Affairs, Wu Hongbo says the Conference will be a ‘game changer’ and a chance for the international community to raise awareness about the importance of the oceans.

Noting that SDG 14 is one of the vanguards for the whole Agenda 2030 for Sustainable Development, Mr. Wu also makes the connection between oceans and the goal to eliminate hunger. "We are actually receiving a lot of nutrition and the food from the sea so we have to protect the sea," said Mr. Wu.

Besides food and nutrition, Mr. Wu pointed out the significant contribution of the ocean to people's overall wellbeing and in mitigating the effects of climate change.

"The ocean and the sea are the natural regulator of our climate and they are good for sanitation," noted the UN Under-Secretary-General. "People are saying that the oceans sink one third of greenhouse gas emission. If we lose the sea and oceans, just imagine what kind of situation we are going to have," warned Mr. Wu, who also made a connection between oceans, employment and economic growth.

"I think the best or sustainable use of marine resources would really have a big boost to the economic growth and create a lot of jobs," said Mr. Wu. 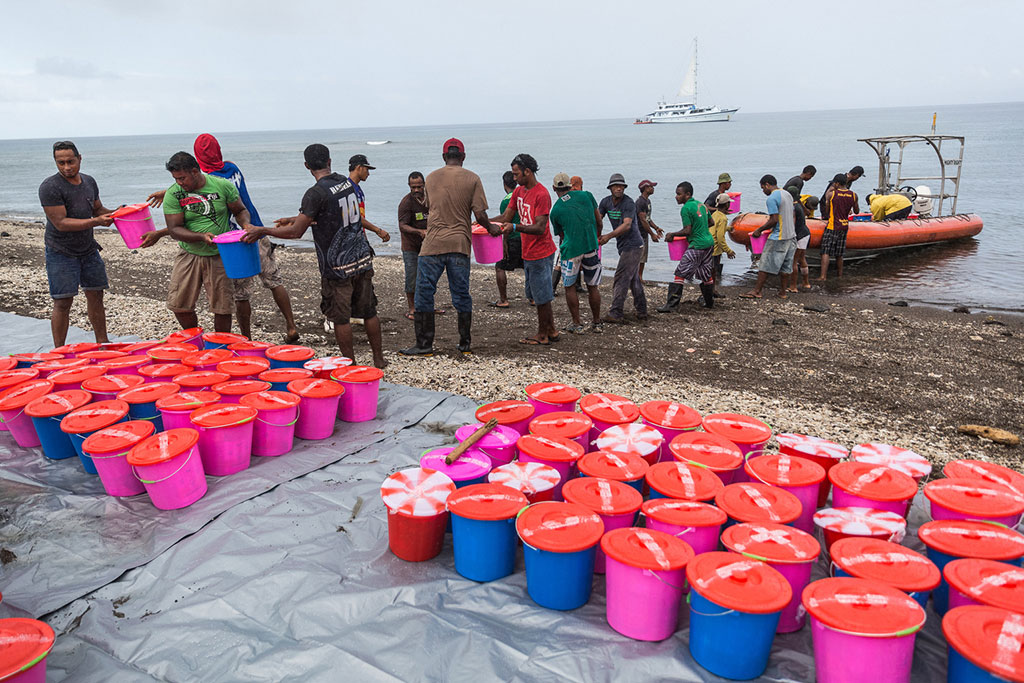 Residents of Taveuni island in Fiji helping to unload food rations that were delivered to affected villages in the south of the island. The southern part of Taveuni Island is among areas that were most affected by Cyclone Winston. Some villages were completely destroyed and people were left without food for about a week, as access to the island was cut. After the runway and roads were cleared, people in affected villages started to receive food rations, but most of them were still in shock after they lost everything they had. Photo: UNICEF/Sokhin

The outcomes of the Oceans Conference will, according to the President of the UN General Assembly, include a call to action and a conference report that will constitute the global body's work plan for implementing the SDG 14.

"We must keep our vision clear. We must universalise our efforts. We must maintain the momentum towards the transformative commitments that will emerge from the Oceans Conference in June," underscored Mr. Thomson during the first preparatory meeting.

Mr. Thomson places particular significance to the outcomes of the Ocean Conference which, he noted, would constitute "a turning point in history."

Sweden's Deputy Prime Minister Isabella Lövin sees the Ocean Conference as an opportunity to "share experiences, share best practices," she told the high-level panel. "This Ocean Conference will be the hub where we can actually share this knowledge, also transfer technology, and support developing countries so they will have access and the capacity to share the way that is needed for the oceans because the oceans connect us all," she said.

In preparation for June's Ocean Conference that aims to help safeguard the planet's oceans, UN General Assembly President said it’s time to ‘take action fast’ and the June conference will be a ‘turning point’ in history for protecting the ocean.

Ms. Lövin also expressed concerns about unsustainable exploitation of ocean resources and pollution, warning, "If these trends continue, with the overfishing, with more and more plastic pollution in our oceans, we will have more plastics than fish in our oceans by 2050."

Like her fellow panellists, she made an urgent call to action. "It's really, really serious so this is what we have to do now in order to leave our planet with good conscious to our children and grandchildren," she said, adding, "We need to take action now and we can do it. We don't have any excuses for not doing it."

Ahead of the first-ever UN conference on oceans, Swedish Deputy Prime Minister Isabella Lövin says the international community should share knowledge, technology and support developing countries on issues related to oceans.
♦ Receive daily updates directly in your inbox - Subscribe here to a topic.
♦ Download the UN News app for your iOS or Android devices.
ocean|environment

State of the ocean will ‘ultimately determine the survival of our species’: UN Special Envoy 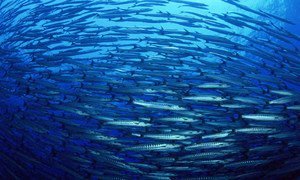