UNDP Peru/Mónica Suárez
Millions of people are not benefiting from progress, with the gap set to widen unless deep-rooted development barriers, including discrimination and unequal political participation, are tackled.
21 March 2017

A flagship United Nations report launched today finds that although the average human development improved significantly since 1990, progress is uneven, with systemic discrimination against women, indigenous peoples and ethnic minorities.

The latest Human Development Report, released annually by the UN Development Programme (UNDP), found that while many people have greater access to education, health and sanitation, for example, more focus needs to be paid to who has been excluded and why.

“By eliminating deep, persistent, discriminatory social norms and laws, and addressing the unequal access to political participation, which have hindered progress for so many, poverty can be eradicated and a peaceful, just, and sustainable development can be achieved for all,” said UNDP Administrator Helen Clark, speaking at the report launch in Stockholm, alongside Swedish Prime Minister Stefan Löfven and the report’s lead author and Director of the Human Development Report Office, Selim Jahan.

Entitled Human Development for Everyone, the report noted that one in three people worldwide continue to live at a low level of human development, as measured by the Human Development Index – essentially a ranking of countries based on strides made with a peace-centric model of progress.

According to the report, women and girls are systematically excluded by economic, political, social and cultural barriers.

“Women tend to be poorer, earn less, and have fewer opportunities in most aspects of life than men,” according to the report.

The report also points to “dangerous practices,” such as female genital mutilation and forced marriage, which continue to hamper the development of women and their inclusion in society.

In addition to women and girls, the report points to “patterns of exclusion and lack of empowerment” of people in rural areas, indigenous peoples, ethnic minorities, people with disabilities, migrants and refugees, and members of the lesbian, gay, bisexual, transgender and intersex community.

The report calls for far greater attention to empowering the most marginalized in society, and recognizes the importance of giving them greater voice in decision-making processes.

The report also warns that key development metrics can overstate progress when they focus on the quantity, rather than the quality, of development. For instance, girls’ enrolment in primary education has increased, but in half of 53 developing countries with data, the majority of adult women who completed four to six years of primary school are illiterate.

Unlike in previous years, this year’s report is also available in an app for iOS and Android. 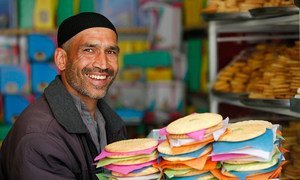 In a message on the occasion of Nowruz – the day that celebrates the arrival of the spring season – the head of the United Nations cultural agency urged everyone to embrace the day's values and be inspired by its universal message of peace and solidarity.