UNAMA/Fardin Waezi
In Afghanistan, bakeries prepare a special type of cookie, called “Kulcha-e Nowrozi,” which is only baked for Nowruz. Other special dishes include “Haft Mewa,” a fruit salad made from seven different dried fruits, and “Samanak” made by women in a special ceremony that includes singing.
21 March 2017
Culture and Education

In a message on the occasion of Nowruz – the day that celebrates the arrival of the spring season – the head of the United Nations cultural agency urged everyone to embrace the day's values and be inspired by its universal message of peace and solidarity.

“At a time when violent extremism seeks to destroy diversity and freedoms, Nowruz is a reminder of the power of culture and heritage to build resilient and sustainable societies,” said Irina Bokova, the Director-General of the UN Educational, Scientific and Cultural Organization (UNESCO), in her message.

Highlighting that in the midst of global challenges such as violent extremism, Nowruz is a source of confidence and belonging for all, Ms. Bokova noted that the message it conveys is all the more important given the efforts around the globe to implement the 2030 Agenda for Sustainable Development and the Paris Agreement on climate change.

“Through dance, poems, songs, meals and other social practices, the celebration of Nowruz is a moment for men and women, boys and girls, to pay their respect to nature and wish for a better future,” she added.

Nowruz, which marks the first day of spring and the renewal of nature, is celebrated by more than 300 million people all around the world and has been celebrated for over 3,000 years in the Balkans, the Black Sea Basin, the Caucasus, Central Asia, the Middle East and other regions.

In 2009, Nowruz was inscribed on the UNESCO Representative List of Intangible Cultural Heritage of Humanity as a festivity of rich diversity promoting peace and solidarity across regions and generations. The following year, the UN General Assembly welcomed its inclusion on the List.

Quoting Rumi, the famous poet, Ms. Bokova said: “'Out beyond ideas of wrongdoing and rightdoing, there is a field. I will meet you there.' Nowruz is a field where reconciliation and dialogue can take their roots.”

“It is a field where traditions and rituals are passed from generation to generation, to share moments of togetherness, tolerance, harmony and joy,” she noted.

Also today, the UN Assistance Mission in Afghanistan (UNAMA) highlighted the importance of Nowruz in promoting cultural diversity and friendship among people.

Extending its best wishes to the people of the country on Nowruz, the UN Mission said that it was a time for renewal and celebration, as well as for promoting values of peace and solidarity between generations and communities.

“On the eve of this important day, the UN family in Afghanistan expresses hope that the year ahead brings peace to the Afghan people, who deserve a future free from conflict and filled with hope,” said Tadamichi Yamamoto, the UN Secretary-General's Special Representative for Afghanistan and head of UNAMA. 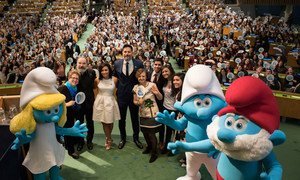 Ahead of International Day, UN and Smurfs team up to promote happiness and sustainable development

Every person – no matter how big, small or blue – can make the world more peaceful, equitable and healthy, the United Nations today told young people at a special ceremony for the Sustainable Development Goals (SDGs) that included the Smurfs and a handover of the key to Smurfdom.