The Government of Somalia has launched an oral cholera vaccination (OCV) campaign today with the support of the United Nations health agency, targeting over 450,000 people in seven high-risk areas around the country.

The first-ever OCV campaign to be conducted in the country comes at a critical time after Somalia announced the ongoing drought as a national disaster and faces the possibility of another famine, according to a news release issued yesterday by the World Health Organization (WHO).

“This is one of the largest oral cholera vaccination campaigns conducted in Africa,” said Ghulam Popal, WHO Representative in Somalia. “This vaccination campaign will contribute to the reduction in the number of new cholera cases, interrupt transmission and limit the spread of cholera,” he said.

Somalia is currently experiencing a large-scale outbreak of cholera with roughly 11,000 cases and 268 deaths reported in 11 regions since the beginning of 2017. This is more than half the number of cases reported for 2016.

RELATED: 'The world must act now to stop this,' UN chief Guterres says on visit to Somalia

Somalia has long experienced a humanitarian emergency due to conflict, insecurity, displacement of people and limited access to health system. This situation is further compounded by drought, malnutrition and lack of access to clean water and sanitation facilities. If the current drought and food insecurity continue, the number of cholera cases is likely to increase. Preventative measures such as oral cholera vaccine can mitigate these numbers, and save lives.

The campaign is being held in select communities in Mogadishu, Kismayo and Beledweyne through a combination of fixed and mobile sites for maximum accessibility by the communities. The vaccines, which will be administered to at-risk persons aged one year or older, are being delivered in 2 rounds. The first round of the campaign has commenced today and will continue until 19 March, and the second round of the campaign will be held from 18 to 22 April. 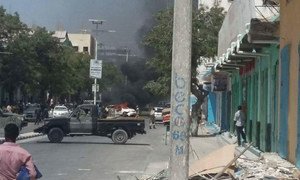 The United Nations envoy for Somalia has strongly condemned this morning’s bomb blasts at two locations in Mogadishu that reportedly killed a number of civilians.