WHO
Over the past 6 years of the war in Syria, access to health services for the civilian population in the country has seriously deteriorated.
15 March 2017

As the brutal war in Syria enters its seventh year, peace “is a moral and political imperative both for the Syrian people and for the world,” United Nations Secretary-General António Guterres said today, urging the conflict parties to fully back a fragile ceasefire and ensure aid access, as well as to support UN-facilitated talks set to pick up again late this month.

“For six years now, the Syria people have been victims of one of the worst conflicts of our time,” said Mr. Guterres in a statement on the crisis in Syria, which began in March 2011 after a crackdown on massive popular protests throughout the country turned into an armed struggle that has dispalced millions.

The UN chief issued two urgent appeals to all the parties, firstly, to make the most of the 30 December 2016 ceasefire established by the guarantors of the Astana meetings – Russia, Turkey and Iran – enhance it further, and ensure that relief aid can reach all those in need in Syria without any obstacles and impediments.

Secondly, the UN chief appealed to all those with influence on the conflict parties to overcome their differences and work together to put an end to the conflict, namely by contributing to the success of the intra-Syrian negotiations in Geneva on the basis of the Geneva Communiqué and relevant UN Security Council resolutions, including resolution 2254 (2015), which endorsed a road map for a peace process in Syria, including specific language on governance, constitution and elections.

For his part, Mr. Guterres underscored: “Peace in Syria is a moral and political imperative both for the Syrian people and for the world – an imperative that cannot wait.”

Meanwhile, as the conflict enters its seventh grim year, the Syrian people have watched huge parts of their country reduced to rubble, according to the UN humanitarian coordinator.

“The toll taken on civilians is inexcusable. Hundreds of thousands of people have been killed. Almost five million people – the majority of them women and children – have fled the grotesque violence and deprivation and are now living as refugees,” said UN Under-Secretary-General for Humanitarian Affairs Stephen O‘Brien in his message on the crisis.

He added that too many who set out on perilous journeys to escape the war perished on the way.

“As I speak,” continued Mr. O’Brien, “more than six million people are displaced within Syria. They are among the 13.5 million people in Syria who are in dire need of humanitarian aid.”

Families and entire communities are struggling to meet their most basic food needs. While food shortages worsen, a seemingly endless supply of bombs and artillery shells continue to extinguish lives. Moreover, a generation of children in Syria have known nothing but brutal conflict and fear during their short lives. 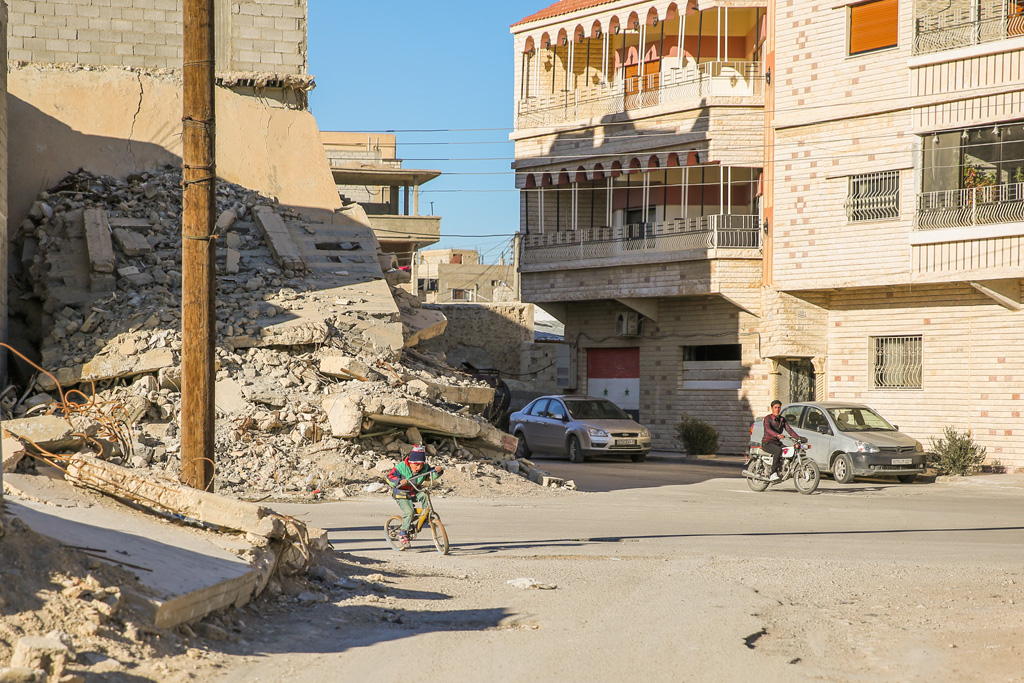 A boy cycles past the rubble of a destroyed house in Qara, where fighting erupted in 2014, dragging the town into the brutal Syrian conflict. Photo: UNHCR/Qusai Alazroni

While he underscored that the conflict would never end without a genuine political commitment to peace, Mr. O’Brien asserted that “even if a political agreement were to succeed tomorrow, millions of Syrians will still require critical humanitarian assistance for months and likely years to come.”

He stressed that brave humanitarians would continue to stand with the people of Syria to deliver aid to millions of civilians most in need – regardless of which side they are perceived to be on.

Mr. O’Brien, who is also the UN Emergency Relief Coordinator, said that he joined Syrians in hoping that 2017 would be the year the carnage finally ended, and that the parties to the conflict – and those that support their actions – regained their sense of humanity.

He concluded his message saying: “We owe this and so much more to the millions of battered and beleaguered women, men and children who have suffered through this most uncivil war.”

Syria’s healthcare system has also fallen victim to the conflict

Civilian access to health services has also seriously deteriorated, with more than half of public hospitals and primary health centres having either closed or remaining only partially functioning, according to the World Health Organization (WHO).

"Substantial health needs in Syria continue to be unmet and resources to support the health workforce and health system are stretched to the limit," said Dr. Peter Salama, WHO Executive Director of Health Emergencies Programme.

While almost two–thirds of healthcare workers have fled, many of the medical facilities that remain open lack clean water, electricity and sufficient medical and surgical supplies.

"On this sad anniversary of the start of war in Syria and before more lives are lost, WHO calls for systematic and unhindered access to all areas to deliver life-saving medicines, vaccines and medical supplies," stressed Dr. Salama.

Despite obstacles, including security threats, WHO has continued to support health services with medicines and supplies; by training the remaining health care staff; and assisting with medical teams and mobile clinics through cross line and cross-border programmes.

AUDIO: Accessing health care is a challenge for most people in Syria, where six years of conflict have left more than half of all public hospitals and primary health centres closed or only partially functioning, according to the World Health Organization (WHO).

The suffering of children in war-torn Syria “hit rock bottom” in 2016 with the highest number of grave violations against them since verification began in 2014, underscored the United Nations children's agency urging all parties to the conflict, those who have influence over them, and anyone who cared about children to find an immediate political solution to end the conflict.