“At a time of divisions in so many areas, this should be an issue that can unite us,” Secretary-General António Guterres told the 15-member Council, stressing that “slavery is not a thing of the past.”

“Let us come together around the key issues of prosecution, protection and prevention, and thereby build a future without human trafficking,” he added.

The Secretary-General outlined a number of UN tools that exist which can be used to punish human trafficking, and to prevent it in the first place. Among them is the UN Convention against Transnational Organized Crime and its Protocol, which includes the first internationally agreed definition of the crime of trafficking in persons and provides a framework to effectively prevent and combat it.

He noted also the International Labour Organization (ILO) Conventions and the complementary Global Plan of Action on Human Trafficking. Approved in 2010, the Plan aims to better coordinate national responses to this scourge, and includes a UN Voluntary Trust Fund for Victims of Trafficking in Persons, Especially Women and Children.

In his speech, Mr. Guterres called on Member States to strengthen intelligence-sharing and other law enforcement, while also addressing the underlying vulnerabilities of victims, such as educating girls, respecting the rights of minorities, and creating safe paths for migration.

He also called for engagement with the private sector, and cautioned that any support needs to incorporate the voices and views of the people effected. According to UNODC’s 2016 Global Report on Trafficking in Persons, issued in late-December, victims of trafficking are found in 106 of 193 countries. Many of these are in conflict areas, where the crimes are not prosecuted.

“For organized crime networks, human trafficking is a low-risk, high-reward criminal business, a perception reinforced by the inexcusably low conviction rates still reported around the world,” told the Council Yury Fedotov, Executive Director of UNODC via videoconference from Vienna.

In addition to an estimated 21 million people around the world who are victims of forced labour and extreme exploitation, Mr. Fedotov discussed the threats facing refugees and displaced persons. “As conflict displaces countless people, as the rule of law breaks down, as cooperation between countries falter, criminals see a clear business opportunity,” he noted.

The best way to counter trafficking and protect the most vulnerable is to fully implement and make sure of the frameworks already in place, Mr. Fedotov underscored.

He noted that the Global Plan of Action will be reviewed this October, and will focus on trafficking in conflict situations.

“I hope you will take advantage of this opportunity,” Mr. Fedotov told the Council. 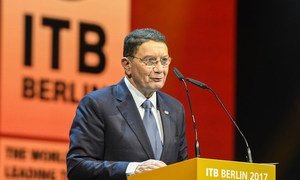 The United Nations-backed meeting on tourism has spotlighted the leading role of Governments in preventing all forms of child exploitation in the leisure travel industry.