UNICEF/UN035877/LeMoyne
In Jérémie, Haiti, children play at the Église Chrétienne Nan Lindy. Hundreds of people have sought temporary shelter at the church after countless homes were destroyed by Hurricane Matthew.
13 March 2017

An independent United Nations expert on human rights today welcomed the recent completion of the electoral process as “remarkable progress” for the island nation, while he also urged the authorities to address the situation in prisons, and redouble efforts to help Haitians affected by Hurricane Matthew and the 2010 earthquake.

Following his eight official mission, Gustavo Gallón, the Independent Expert praised “the transparency, professionalism and commitment of the Provisional Electoral Council, and the provisional government authorities in leading the elections.”

Even though not enough, the Independent Expert has noted the election of a female senator as well as three female parliamentarians to the lower Chamber. He also invited the authorities to intensify their efforts in continuing to promote the political participation of women.

He went on to say that detention conditions in Haitian prisons are extremely inhuman, cruel and degrading, according to the Independent Expert. Long pre-trial detention, which amounts to an average of 70 per cent at national level, is among the main causes of prison overcrowding, which reaches a rate of 358 per cent, equivalent to 1.43 square meters per prisoner.

There are prisons where the situation is even worse, according to a study conducted in 2016 of the National. “It can be said that 91 per cent of all detainees in this prison who are awaiting trial are illegally or arbitrarily detained, which represents an increase of 23 per cent since 2014,” Mr. Gallón explained, adding that the excessive level of overcrowding is also a factor, among others, that contributes to the high level of death in prison. 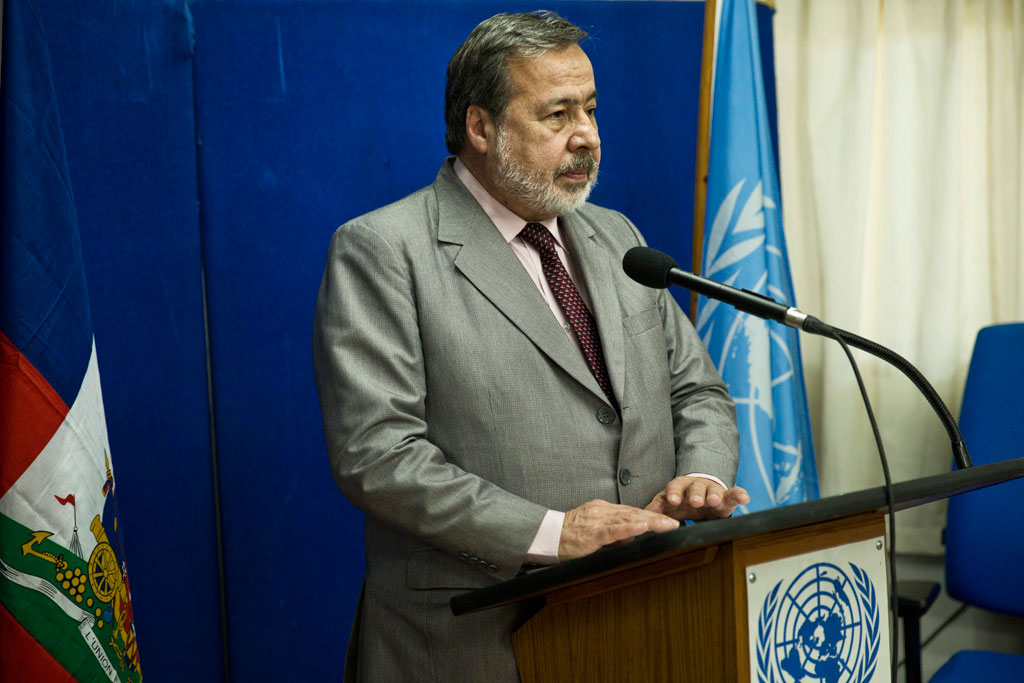 Independent Expert on the situation of human rights in Haiti, Gustavo Gallón, briefs the press at the end of his sixth official mission to the Caribbean country. Photo: MINUSTAH

“If the current trend continues, projections for the year 2017 can result in the death of 229 prisoners, an annual mortality rate of 21.8 per 1,000," he said. Taking note of the establishment of a new Presidential Commission to assess the situation in prisons, he made an appeal to the authorities to implement urgent actions aimed at the abolition of prolonged pre-trial detention in order to improve prison conditions and to respect the rights of people deprived of their liberty.

The Independent Expert also called for efforts to continue to deal with the issue of people displaced following the 2010 earthquake, Hurricane Matthew last year, and the expulsions of Haitians from the Dominican Republic. “The dialogue between the Haitian authorities and their Dominican counterparts should be strengthened to ensure the rights to nationality and identity of Haitian people and their descendants,” he said.

The United Nations office dedicated to disaster risk reduction today called for urgent support to improve disaster risk management in Haiti, following a damage assessment that shows the country lost $2.7 billion, or 32 per cent of gross domestic product (GDP), as a result of Hurricane Matthew six months ago.