The next round of the United Nations-facilitated intra-Syrian talks is expected to convene on 23 March to discuss issues related to governance, constitution, elections and counter terrorism, the UN Special Envoy for Syria has said.

“My current intention is to bring the invitees back to Geneva for a fifth round with a target date of 23 March,” Staffan de Mistura told reporters yesterday at the UN Headquarters in New York after he briefed the Security Council on the outcome of the fourth round of the discussions, which ran in the Swiss city from 23 February to 3 March.

He said the fourth round of the Geneva talks “achieved much more than many people had imagined we could have.”

“No one left, everybody stayed. They were focused, we got an agenda, we got a timeline, we got some agreement on substance,” Mr. de Mistura said, noting that the fifth round of talks will build on the outcome of the previous one and that counter terrorism is now part of the agenda laid out in UN Security Council resolution 2254.

In parallel with the UN-facilitated intra-Syrian talks, Kazakhstan has been hosting talks on a ceasefire in its capital, Astana – diplomatic efforts led by the so-named ceasefire guarantors, Iran, Russia and Turkey.

On the Astana talks, Mr. de Mistura said that although the responsibility of their success is in the hands of these guarantors, the UN dispatches a technical team to the process, because without a strong ceasefire, the UN-facilitated Geneva talks would be fragile.

The UN envoy urged the Security Council to continue to support his efforts. 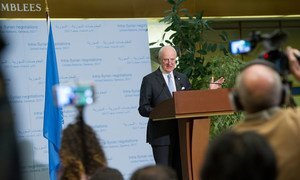