Amid escalating violence, the United Nations humanitarian agency for children and its partners have completed the first round of a nationwide door-to-door vaccination campaign reaching five million children under the age of five with oral polio vaccine and vitamin A supplementation.

“In the last two years, more children have died from preventable diseases than those killed in the violence,” said Meritxell Relaño, the UN Children's Fund (UNICEF) Representative in Yemen, in a press release. “This is why vaccination campaigns are so crucial to save the lives of Yemen's children and to secure their future.”

In the first campaign of its kind this year, 40,000 vaccinators spread across Yemen to provide children with polio vaccine and vitamin A supplements. Mobile health teams have reached children wherever they are, including in places where access to health services has been cut off by the fighting. Health workers have shown heroic resolve in crossing frontlines, mountains and valleys to vaccinate children.

UNICEF says that the campaign comes at a critical time. Children in Yemen are living on the brink of famine and widespread malnutrition has drastically increased their risk of disease. More than half of Yemen's medical facilities are no longer functional and the health system is on the verge of collapse.

UNICEF is scaling up its humanitarian response, including support for the treatment of 323,000 children against severe acute malnutrition, and the provision of basic healthcare services to one million children and over half a million pregnant and breastfeeding mothers.

“Children are dying because the conflict is preventing them from getting the health care and nutrition they urgently need. Their immune systems are weak from months of hunger,” said Dr. Relaño, calling on all parties to the conflict to find a political solution to this crisis. 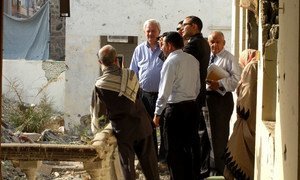 The people of crisis-torn Yemen urgently need humanitarian assistance and protection, especially in the north of the country where there is a threat of famine, the United Nations Emergency Relief Coordinator warned today.