The richness, welfare and prosperity of countries depend on the full integration of women in the development process, United Nations Secretary-General António Guterres said today, commemorating International Women’s Day at a ceremony in Nairobi as part of his visit to Kenya.

Speaking at an event alongside the First Lady of Kenya, Mr. Guterres told the hundreds of assembled women leaders at the Government’s official celebration of the International Day, that every effort had to be made to finally defeat male-dominated culture if we are to be able to achieve gender equality.

“The truth is that north and south, east and west […] everywhere, we still have a male-dominated culture,” he said, recalling that he had pushed hard for women’s empowerment when he was the Prime Minister of Portugal and, as the former UN High Commissioner for Refugees, he had met women who suffered the worst possible abuse.

Against this background, and the enduring male-dominated culture and violation of women’s human rights, “we need to have […] policies of gender equality [and] policies of protection of women in vulnerable situations, but the key […] is our strong commitment to women and girls’ empowerment in our societies,” he stated.

Noting the three pillars of the UN – human rights, peace and security and development – he also underlined that “it is better to prevent conflict when we have women fully empowered in societies and it’s better to solve conflicts when fully participate in conflict resolution.”

Mr. Guterres also had the opportunity to visit a number of field projects in the Mathare slums, including a women’s empowerment program run by UN Human Settlements Programme (UN-Habitat) as part of its slum upgrading initiative and a UN WOMEN project designed to encourage the political participation of women. He was able to listen to a group of women who had decided to run for office, often against great odds.

VIDEO: Wrapping up his three day-visit to the Horn of Africa, Secretary-General António Guterres attends the commemoration of International Women's Day in Nairobi, Kenya in the company of First Lady of Kenya, Margaret Kenyatta.

Earlier in the day, the Secretary-General met with Kenya President Uhuru Kenyatta at State House.

Speaking to the press following the meeting, Mr. Guterres expressed his belief that the “narrative of the UN about Africa has not always been the right one,” being sometimes “too much concentrated on crisis.”

And while it is true that there are crises in Africa – as there are crises in Europe, Asia and elsewhere – Africa must be seen more and more as a land of achievements and opportunity. “And […] Kenya is the symbol of that achievement and that opportunity,” he said, going on to express solidarity with the Kenyan Government and people regarding the drought that is affecting the country.

“I hope that the international community will be able to match the generosity that Kenyans have always shown, namely in relation to refugees, and support the country now that the drought has been prolonged in such a way that, of course, the resources of the country are themselves in difficulty to face this enormous challenge,” he underscored.

Turning next to his visit yesterday to neighbouring Somalia, he reiterated his concern for ongoing drought there, saying: “People are dying. This must stop.” The “international community must act now and mobilize to support the Somali people in this very difficult situation.”

Mr. Guterres visited a settlement for people displaced by the drought. For over an hour, he walked through the camp, asked question and listened to the stories of men, women and children who had come to Baidoa to seek food and water. Some had recently resettled from the Dadaab refugee camp in Kenya only to be forced to move again because of the drought. 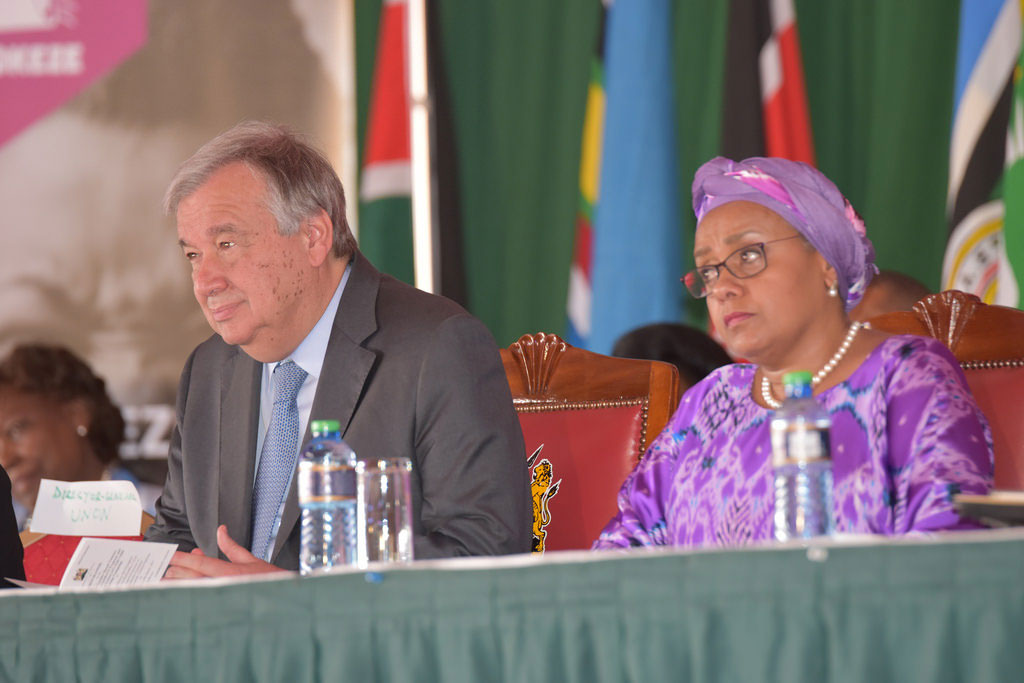 “As we meet today to celebrate the positive developments that have taken place over the years in the promotion and protection of women and girls’ human rights, let us pause to recognize that this progress has often been slow, fragile and uneven,” said Mr. Thomson.

He called on the even to recall that “if we are to achieve a future in which all women and men enjoy equal rights, empowerment, and opportunity, then we must commit to decisive action to overcome the entrenched obstacles still preventing progress.”

Observance of International Women’s Day at UN headquarters in New York, under the theme “Women in the Changing World of Work: Planet 50-50 by 2030”. UN Photo/Rick Bajornas

Also today, the Organization’s Rome-based agencies – the Food and Agriculture Organization (FAO), the International Fund for Agricultural Development (IFAD) and the World Food Programme (WFP) – reminded the world that women and girls play a crucial role in achieving the 2030 Agenda for Sustainable Development, in particular, the goal of eradicating hunger and extreme poverty.

Leaders from the three agencies reinforced their commitments to step up efforts to invest in the capacities of rural women as key agents of change in building a world without hunger.

Hearing the heart-wrenching stories of desperate families displaced in Somalia, United Nations Secretary-General António Guterres today urged a massive scale up in international support to avert a famine in the drought-striken Horn of Africa nation and curb the spread of cholera.