7 March 2017
Two United Nations human rights experts are calling for a comprehensive new global treaty to regulate and phase out the use of dangerous pesticides in farming, and move towards sustainable agricultural practices.

The Special Rapporteurs pointed to research showing that pesticides were responsible for an estimated 200,000 acute poisoning deaths each year. Some 99 per cent of fatalities occurred in developing countries where health, safety and environmental regulations were weaker.

The experts particularly emphasized the obligation of States to protect the rights of children from hazardous pesticides, also warning that certain pesticides can persist in the environment for decades and pose a threat to the entire ecological system on which food production depends.

While acknowledging that certain international treaties currently offer protection from the use of a few pesticides, they stressed that a global treaty to regulate the vast majority of them throughout their life cycle does not yet exist, leaving a critical gap in the human rights protection framework.

“Without harmonized, stringent regulations on the production, sale and acceptable levels of pesticide use, the burden of the negative effects of pesticides is felt by poor and vulnerable communities in countries that have less stringent enforcement mechanisms,” they emphasized. 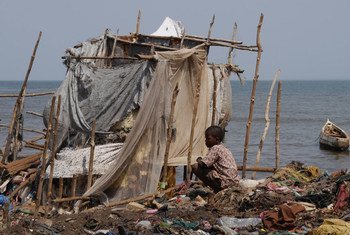 6 March 2017
Unhealthy environments are responsible for one-quarter of young child deaths, according to two new reports from the United Nations health agency, which reviewed the threats from pollutants such as second-hand smoke, UV radiation, unsafe water and e-waste.