IOM
Pakistani migrants in Kos, Greece, showing a map he received with information about the closure of Hungary border and suggesting to go through Croatia instead.
7 March 2017

The United Nations refugee agency voiced deep concerned at a new law voted today by the Hungarian Parliament that could lead to mandatory detention of all asylum-seekers, including many children – for the entire length of the asylum procedure – and warned that it would have a terrible impact on people who have already suffered greatly.

“In practice, it means that every asylum-seeker, including children, would be detained in shipping containers surrounded by high razor wire fence at the border for extended periods of time,” Cécile Pouilly, a spokesperson for the Office of the UN High Commissioner for Refugees (UNHCR), told the media today at a news briefing at the UN Office at Geneva (UNOG).

“The new law violates Hungary's obligations under international and European Union (EU) laws, and will have a terrible physical and psychological impact on women, children and men who had already greatly suffered,” she added.

According to the UN agency, under international and EU laws, the detention of refugees and asylum-seekers could only be justified on a limited number of grounds, and only where it was necessary, reasonable and proportionate.

That requires authorities to consider whether there were less coercive or intrusive measures to achieve those goals, based on an assessment of the individual's particular circumstances, explained Ms. Pouilly, adding that alternatives to detention should always to be considered first.

“Failure to do so could render detention arbitrary,” she said.

Until now, asylum-seekers had been allowed to stay in open reception centres across the country. However, with the new law the people who had entered the country, having passed through the transit zones, would be moved back to those zones and confined to the containers.

“This is extremely worrying, especially thinking about children being detained,” noted Ms. Pouilly, adding: “Children should never be detained under any conditions as detention was never in a child's best interest.”

She also said that the Government had also already erected a razor wire barrier along the entire border with Serbia and, now, only 50 asylum seekers were allowed to enter the country per week, at two crossing points.

Lack of legal pathways to access Europe and because of the closed borders, many people are resorting to smugglers, which make them, and especially children, event more vulnerable and harder to track.

The UNHCR spokesperson further told the media that the physical barriers already erected, together with legislative and policy obstacles, make it nearly impossible for asylum-seekers to enter the country, apply for asylum and receive international protection. 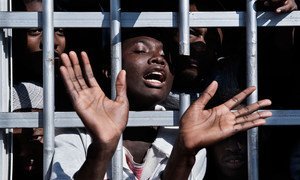