IOM/UN/Volodymyr Shuvayev
Elderly people have been particularly hard hit by the conflict in Eastern Ukraine.
7 March 2017

To meet the emergency needs of 180,000 people in eastern Ukraine, the United Nations migration agency today announced plans to provide aid ranging from blankets to money to cover electricity costs and psychological support at a cost of $25 million.

“Many of the people who need urgent help are trapped in villages along the contact line without fuel for heating and cooking, hot water, food, or basic necessities,” said said Manfred Profazi, the Chief of Mission for the International Organization for Migration (IOM) in Ukraine.

In addition, an estimated 3.8 million people are in need of humanitarian aid, according to IOM figures. More than half of those people are displaced across the country “jobless, struggling to pay their utility bills and lacking funds for food and medical expenses,” according to information released today.

One of the worries is that mass displacement elevates the risk of human trafficking. In addition to humanitarian concerns, the UN agency is aiming to help the displaced communities come together to strengthen mutual trust.

“Traffickers know the market and cynically move in to exploit vulnerable people who are desperate to provide for their families. We will work with communities both to prevent it happening and to assist victims,” Mr. Profazi said. 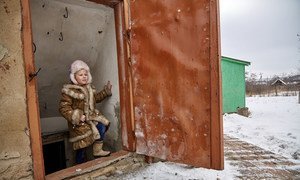