UN News/Laura Gelbert
Women displaced by drought waiting to meet Secretary-General António Guterres during his visit to Baidoa, Somalia, where the focus was on famine and cholera.

7 March 2017
Hearing the heart-wrenching stories of desperate families displaced in Somalia, United Nations Secretary-General António Guterres today urged a massive scale up in international support to avert a famine in the drought-striken Horn of Africa nation and curb the spread of cholera.

Hearing the heart-wrenching stories of desperate families displaced in Somalia, United Nations Secretary-General António Guterres today urged a massive scale up in international support to avert a famine in the drought-stricken Horn of Africa nation and curb the spread of cholera.

“It is exactly because it is tragic and because it is hopeful that it makes sense to make a very strong appeal to the international community to support Somalia at the present moment,” Mr. Guterres told reporters in the country's capital, Mogadishu.

With almost half of the Somali population in need of assistance, including 330,000 children who are acutely malnourished, the UN chief reiterated an appeal for $825 million for the support of 5.5 million people for six months.

“There is a chance in Somalia to avoid a situation like the one we had in 2011,” he said, referring to the previous famine that killed many in that country.

VIDEO: Visiting displaced people in Baidoa, Somalia, Secretary-General António Guterres today called for a massive scale up in international support to avert a famine in Somalia and curb the spread of cholera. Credit: UN News

But now is also “a moment of hope” because Somalia is turning the page, with a new President elected and a new Prime Minister appointed, he said.

“There is a very strong commitment to enhance security and at the same time to enhance the capacity of the government to start to provide effective services to the population,” he said.

The African Union Mission in Somalia (AMISOM), which is doing a job that the world should be grateful for because it is not only protecting Somalis, but protecting all against terrorism, has not been effectively helped by the international community, he said.

The severe climate is also forcing many people to leave their homes. Leving the capital, Mr. Guterres met and spoke with victims of the current drought when he visited a settlement for internally displaced people (IDPs) today in the town of Baidoa.

According to estimates from the UN Office for the Coordination of Humanitarian Affairs (OCHA) the Liibaan IDP settlement houses some 700 people driven by drought from rural villages since 14 February. Some walked for hours or even days in search of humanitarian assistance.

One of the victims is Nuria Hussein. She and 10-month-old daughter Samira left home in Qansax Dheere district and moved to the settlement, 90 kilometers away, because of the drought. Ms. Hussein’s husband stayed behind. 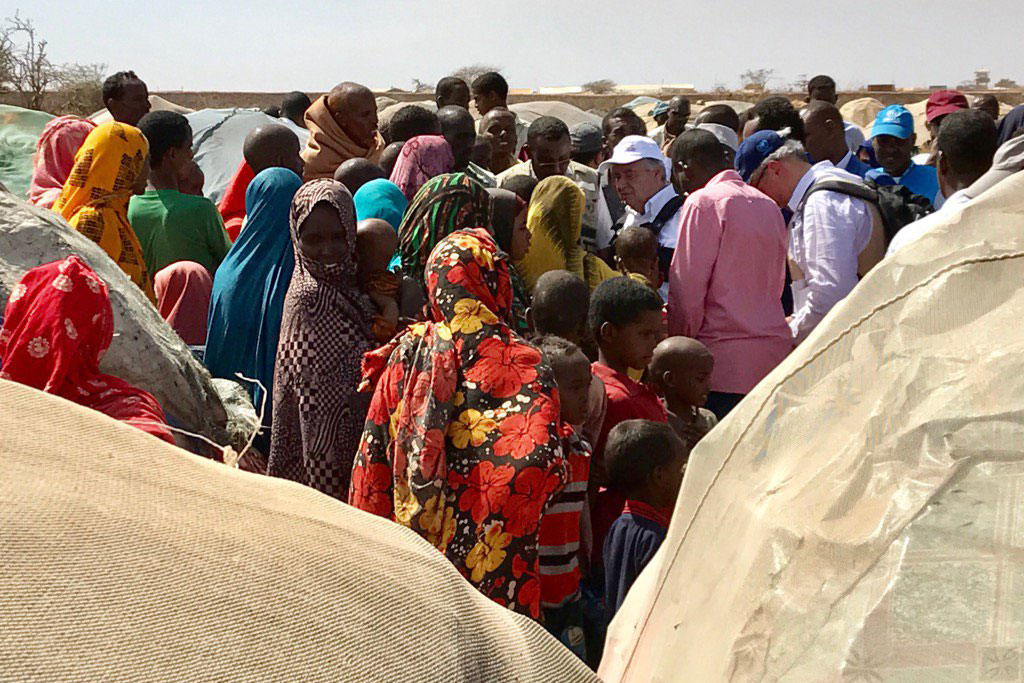 Families displaced by drought in Baidoa, Somalia, gather around Secretary-General António Guterres (white cap), who is in the region urging action to help them. Photo: UNSOM

“If we have stability and if it rains, we can avoid famine and we’ll return home,” she told UN News.

Another victim recalled her long journey to the settlement. A mother of four, she is alone with her children on the site. Her fifth child died of acute diarrhea.

According to OCHA, estimates indicate that over 80 per cent of these newly arrived IDPs are women and children.

In Baidoa, after meeting with President of the Southwest state of Somalia, Sharif Hassan Sheikh Adan, Mr. Guterres visited two camps for internally displaced people just outside the city.

For over an hour, he walked through the camp, asked question and listened to the stories of men, women and children who had come to Baidoa to seek food and water. Some had recently resettled from the Dadaab refugee camp in Kenya only to be forced to move again because of the drought. 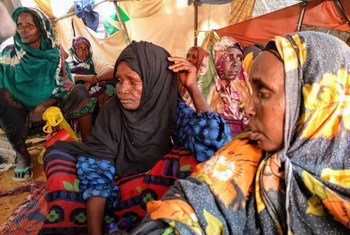 6 March 2017
As a severe drought deepens in Somalia, the risk of famine is looming in the long-troubled country, with about half the population in need of some form of assistance, according to an assessment by United Nations agencies and humanitarian partners.