OCHA
A group of women in Mogadishu, Somalia, after leaving Toro-Toro, 100 kilometres away, because of a lack of water and food.
6 March 2017

As a severe drought deepens in Somalia, the risk of famine is looming in the long-troubled country, with about half the population in need of some form of assistance, according to an assessment by United Nations agencies and humanitarian partners.

The situation has become “significantly worse in the last six months,” explained Joseph Contreras, the spokesperson for the UN Assistance Mission in Somalia (UNSOM).

In addition, the UN reports that nearly 950,000 children under the age of five will be acutely malnourished this year, with 185,000 of that number at risk of death without immediate medical treatment.

Citing ‘worrying similarities’ to the 2011 famine in Somalia, the International Organization for Migration (IOM) this past Friday launched a $24.6 million appeal the more than one million Somalis most affected by the drought.

“We named this (2017) drought ‘Odi Kawayn,’ which is Somali for ‘something bigger than the elders,’” drought victim Halima told the agency, explaining that none of the elders has ever seen a drought as severe as this one.

A massive increase in aid is urgently needed to avert a famine. IOM reports that wages are collapsing, local food prices are rising, animal deaths are increasing, and malnutrition rates are starting to rise. Moreover, water prices are spiralling and Somalis are moving in growing numbers in search of food and water. Without assistance, many people face malnutrition, significantly increased risk of disease, loss of livelihoods and even death.

“We understand their hunger, their thirst and their need to look after their children,” said Mr. O’Brien, noting that by seeing it for himself, “we can make this story known to a much bigger world and try to help.”

“You need to know that you touch our hearts,” he said to the drought victims. 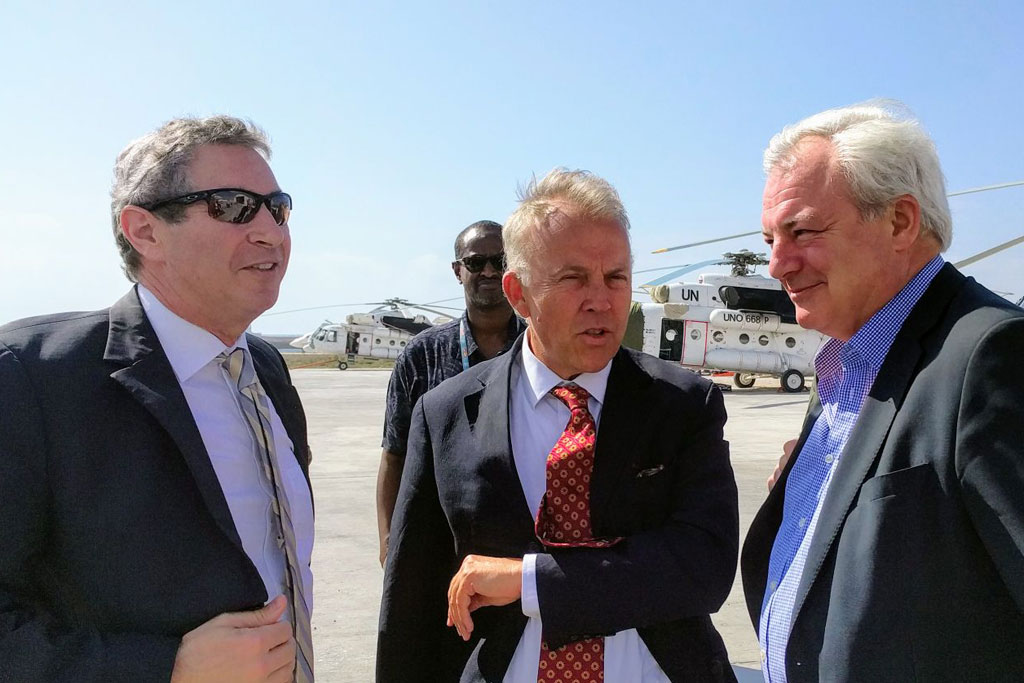 Emergency Relief Coordinator Stephen O’Brien (right), is joined by Humanitarian Coordinator for Somalia, Peter de Clercq (left), and head of the UN Mission in Somalia Michael Keating on arrival in Mogadishu, Somalia, where five and a half million people need urgent assistance over the next six months. Photo: OCHA

According to the UN Office for the Coordination of Humanitarian Affairs (OCHA), which Mr. O’Brien heads up, Zone K first became an IDP settlement in 2011, when a large number of drought affected people from Lower Shabelle, Bay and Bakool regions settled.

It became one of the biggest IDP settlements in Mogadishu but, according to OCHA, the exact number of the people in Zone K is currently unknown.

“Whenever you have enormous pressure on people’s ability to survive or to be protected in conflict, you will get internal displacements, and here we have a severe trend of internal displacement,” explained Mr. O’Brien, noting the need to act “fast, now and together” in order to fund the programmes that would help support people in their hour of need.

Humanitarians in Somalia are seeking an overall $825 million to reach the most vulnerable with life-saving assistance until June 2017.

In a press release, the Humanitarian Coordinator in the country, Peter de Clercq, stated that the “drought situation is deteriorating rapidly.” At this “critical phase,” he highlighted the need to “act fast and efficiently to avoid the worst.”

Mr. Contreras told UN News that whereas in 2011, the drought – and the resulting famine – was concentrated in South Central Somalia, this year, it is affecting more parts of the country, including the north-eastern and the Somaliland regions, with a higher total number of people at risk.

However, he mentioned that the donor community is responding “more energetically” and humanitarian partners have a larger presence around the country to respond to these emergency needs.

Mr. Contreras also noted that Somalia has a new Government, and that the country’s new President, Mohamed Abdullahi ‘Farmajo’, is “completely committed to a robust and effective response to this crisis.”

VIDEO: In Somalia, OCHA's Stephen O’Brien urges the world to help Somalis in desperate need, warning of a severe trend of internal displacement caused by drought in the country. Credit: UN News

To meet the emergency needs of over a million Somalis affected by drought, the United Nations migration agency is appealing to international donors for $24.6 million in funding.