The United Nations peacekeeping mission in the Central African Republic (CAR) is warning a rebel movement against impeding humanitarian access, saying any threats to peacekeepers, aid workers or civilians are “unacceptable” and could be tried as warm crimes.

In a press release issued on Saturday, the UN Integrated Multidimensional Stabilization Mission in CAR, known by its French acronym MINUSCA, warned leaders of the Popular Front for the Rebirth of the Central African Republic (FPRC) that they will be held individually responsible if such acts are carried out.

“Any attack targeting the civilian population, UN and humanitarian personnel is a war crime that can be prosecuted in accordance with Central African law and international law,” MINUSCA underscored.

The Mission called on the FPRC and all armed groups “to refrain from any interference with the work of humanitarian workers, as well as threats against international humanitarian organizations and civilian populations.”

“No armed group has the right to prohibit or impede the free access of humanitarian actors to vulnerable populations, even in areas where these groups continue to have a negative influence,” MINUSCA continued.

In the same statement, the UN Mission rejected attempts to justify the travel to Bambari of 40 or so heavily armed members of the coalition as peaceful.

“These men and the rest of the elements of the coalition violated the demarcation line established by MINUSCA, approaching Bambari with Kalashnikovs and rocket launchers, posing a risk of the city burning to disastrous consequences for the civilian populations,” the Mission said.

According to MINUSCA, “the threats contained in the communiqué of the FPRC prove once again its warlike character and the rejection by its leaders of any peaceful solution to the current crisis, as advocated by the Central African Government and by the international community.”

MINUSCA said it would pursue its mission impartially and “reserves the right to use all means at its disposal by the Security Council to achieve this, in support of the Central African Government.” 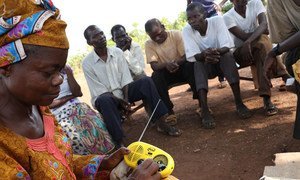 Amid renewed violence that has led to “successive gross violations” of international humanitarian law in two north-eastern provinces of the Central African Republic (CAR), the most senior United Nations relief official in the country has called for free and unhindered access to civilians impacted by the clashes between rival armed groups.