Staffan de Mistura told journalists that participants had engaged in “serious” discussions and said that the sides would be invited to continue discussions later this month.

“It is now clear to everyone and that is beyond dispute that we are here to implement UN Security Council resolution 2254,” Mr. de Mistura said, referring to the Council text approved in 2015 endorsing a road map for peace process in Syria, including specific language on governance, constitution and elections.

“I believe therefore and expect that the sides should now pursue a framework agreement with an agreed political package so a transition can be implemented in line with 2254 – we’re here to talk about that,” he added.

In addition to the issues previously on the agenda, as outlined in resolution 2254 (2015), counter-terrorism has been added at the request of the Government of Syria, according to the envoy.

The major issue of detainees and abductees was also raised by the delegation from the Syrian Government.

In parallel, the talks in Astana – convened by the Governments of Iran, Russia and Turkey – would continue to address issues related to the maintenance of the ceasefire and confidence-building measures.

“We have a clear agenda in front of us,” Mr. de Mistura told reporters, adding: “The train is ready; it is in the station […] warming up its engine. It just needs an accelerator and the accelerator is in the hands of those in this round.” 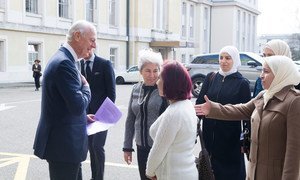