In the wake of a high-profile conviction of a mastermind who murdered and dismembered a woman with albinism, a United Nations independent expert is calling for additional oversight of traditional healers who use body parts in witchcraft rituals and so-called medicines.

Presenting a report to the UN Human Rights Council in Geneva, the Independent Expert on the enjoyment of human rights by people with albinism, Ikponwosa Ero, said the demand for the body parts of people with albinism for the purposes of witchcraft rituals, or in traditional medicine known as muti or juju, has led to the existence of a clandestine market for body parts operating at regional, national and international levels.

“The issue is further complicated by the lack of effective oversight over the practice of traditional healers, the secrecy that often surrounds witchcraft rituals and the absence of clear national policies on the issue,” Ms. Ero said.

She called for a twin-track approach that would urgently address the trafficking of body parts from people with albinism, while also demystifying the misbeliefs about albinism.

At least 600 attacks and violations of rights of people with albinism have been reported in 27 countries, the majority in the past six years, according to information from the Office of the High Commissioner for Human Rights (OHCHR).

Among the attacks was the kidnapping and killing of a 20-year-old woman in South Africa. Ms. Ero welcomed today the conviction of the mastermind in the attack, whose body parts were collected to be used by witch doctors.

“Too often, only middlemen and hired hands are arrested or prosecuted,” Ms. Ero said. “This sentence from the High Court of South Africa is particularly important as it condemns the man who organized and recruited persons for the crime.”

Ms. Ero is the first Independent Expert appointed by the UN Human Rights Council to monitor, report and advise on the situation of those worldwide who have albinism. 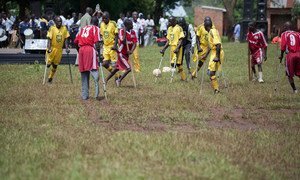 Following the recent global commemoration of the 10th anniversary of the Convention on the Rights of Persons with Disabilities, a United Nations human rights expert today issued a warning that some of the most basic components of the convention have yet to be realized and that urgent steps are necessary to level inequalities.