Russia, China block Security Council action on use of chemical weapons in Syria

UN Photo/Manuel Elias
The Security Council voting on a draft resolution aiming to impose sanctions on Syria for the use of chemical weapons. The draft text failed to be adopted due to the negative votes by two permanent members of the Council (China, Russian Federation).
28 February 2017

With ‘no’ votes from permanent members Russia and China, the United Nations Security Council today failed to adopt a resolution that would, according to press reports, have imposed sanctions against parties using chemical weapons in war-torn Syria.

While nine of the Council’s 15 members voted in favour, Bolivia joined Russia and China in rejecting the text, as Egypt, Ethiopia and Kazakhstan abstained. A negative vote – or veto – from one of the Council’s five permanent members means a resolution cannot be adopted.

Media reports suggest that the draft resolution would have established a sanctions regime, a committee and an expert panel to hold accountable those using and producing chemical weapons in Syria.

The text would also have imposed sanctions on a number of individuals and entities linked to the use of chemical weapons in cases where responsibility was established by the Organisation for the Prohibition of Chemical Weapons (OPCW)-UN Joint Investigative Mechanism (JIM).

The Council came together on 19 December to unanimously adopt a resolution demanding that all parties to the Syrian conflict ensure immediate and unhindered access for the monitoring of evacuations from eastern Aleppo.

But today’s decision also follows two other recent attempts where the Council was unable to take action on Syria: on 8 October, Russia vetoed a resolution that would have called for an end to military flights over Aleppo; and on 5 December, a measure calling for a seven-day ceasefire in the beleaguered city failed to pass after negative votes by both China and Russia. In the past five years, Russia has vetoed seven Council texts on the Syrian conflict, while China has cast a negative vote six times on the issue.

As the Syria Crisis enters its sixth year, civilians continue to bear the brunt of a conflict marked by unparalleled suffering, destruction and disregard for human life. According to the UN Office for the Coordination of Humanitarian Affairs (OCHA), 13.5 million people require humanitarian assistance. Moreover, some 6.3 million have been internally displaced by violence.

The UN Special Envoy for Syria, Staffan de Mistura, has been facilitating the intra-Syrian negotiations in Geneva, which started on 23 February. The discussions are guided by Security Council resolution 2254 (2015), focusing on matters of governance, including a new constitution for Syria and the holding of elections. 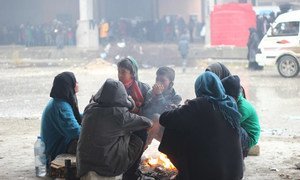 Alarmed at the “devastating” humanitarian crisis in Aleppo, where perhaps thousands of civilians remain trapped, the Security Council today requested the United Nations and other relevant institutions to carry out “adequate, neutral monitoring and direct observation on evacuations from the eastern districts” of the war-battered city.