Most of the 3.2 million people driven forcibly from their homes in early 2016 found shelter in low- and middle-income countries, according to a new study by the United Nations refugee agency.

More than half the new refugees in the first half of 2016 fled Syria’s conflict, with most staying in the immediate region – Turkey, Jordan, Lebanon and Egypt, according to the UN Refugee Agency’s (UNHCR) Mid-Year Trends 2016 report.

For example, relative to the sizes of their populations, Lebanon and Jordan host the largest number of refugees, while in terms of economic performance the biggest burdens are carried by South Sudan and Chad.

“Today we face not so much a crisis of numbers but of cooperation and solidarity,” Mr. Grandi said.

“These are people that flee from danger, they’re not dangerous themselves,” he had said.

Video: 'Which countries host the most refugees?' Credit: UNHCR 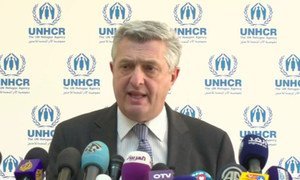 Refugees fleeing danger are ‘not dangerous themselves’ – UN agency chief

The head of the United Nations refugee agency today warned developed countries against politicizing the issue of refugees, stressing that the move risked undermining the principle of international solidarity with those fleeing war and persecution.