OCHA
Two children carry water in Leer, Unity State in South Sudan, parts of which have been declared as famine-affected.
28 February 2017

With hundreds of thousands in need of assistance in famine-struck parts of South Sudan and rising insecurity hampering relief work, a senior United Nations relief official in the country has called on all parties to ensure that humanitarians have immediate, safe and unhindered access across the nation.

“The people of South Sudan are suffering beyond measure. [The famine] represents only the most extreme tip of the iceberg of needs in this country,” said Eugene Owusu, the Humanitarian Coordinator in the country, in a news release issued by the UN Office of the Coordination of Humanitarian Affairs (OCHA).

On 20 February, famine was formally declared in parts of the country. A formal declaration means people have already started dying of hunger.

“To avert further catastrophe, it is imperative that humanitarians are able to act swiftly and robustly,” Mr. Owusu underlined.

The UN official's call follows a series of recent events which have hampered humanitarian operations and placed civilians at risk. For instance, during clashes in Jonglei state, humanitarian compounds were looted by armed actors and community members; and 28 humanitarian workers were forced to relocate from Mayendit County, one of the two counties hit by famine in Unity State, due to insecurity.

Aid workers were also denied access last week to key locations outside of Lainya town, in Central Equatoria, where tens of thousands of people in need have not been reached with aid in months.

“I implore all parties to this conflict to uphold their responsibilities under international humanitarian law, place the plight of the people first, give aid workers unfettered access, and protect civilians,” Mr. Owusu added.

“Time is of the essence, and lives are in the balance, so it is critical that these words be translated into concrete actions on the ground immediately.”

The news release also noted that President of South Sudan provided reassurances that all humanitarian organizations will have unimpeded access to needy populations across the country.

According to OCHA, insecurity and lack of access have complicated an already worrying situation: more than 100,000 people face starvation in the famine-declared parts of the country, and a further one million are on the brink of famine. There are also fears that by the height of the lean season in July, some 5.5 million people could face severe food insecurity across the country.

Additionally, since December 2013, about 3.4 million people have been displaced, including about 1.5 million who fled as refugees to neighbouring countries.

Against this backdrop, humanitarian organizations have appealed urgent funds to respond to the escalating crisis, with $1.6 billion required to provide life-saving assistance and protection to some 5.8 million people across South Sudan in 2017. 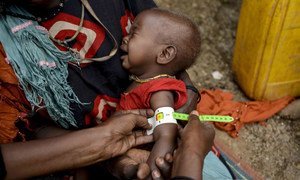