IOM/Francesco Malavolta (file)
Migrants from the Mediterranean are rescued in the Channel of Sicily, Italy.
24 February 2017

An estimated 366 migrants died at sea during their Mediterranean journey to Europe in the first 53 days of 2017, down from 425 of the comparable period of last year, the United Nations migration agency said today.

International Organization for Migration (IOM) has reported that 13,924 migrants entered Europe by sea through 22 February, sharply down from 105,427 a year earlier.

These data include the death toll reported this week from a boat with as many as 133 passengers on board that foundered off Az Zawiyah, near Tripoli on this past Sunday.

According to an IOM source at the scene, the human smugglers stole the craft’s engine and left the vessel drifting, telling passengers that authorities were en route to rescue them. “This is becoming a common tactic,” said IOM Rome spokesman Flavio Di Giacomo. “But when you take an engine from a boat like this, you can no longer treat it as an ‘incident.’ It is homicide.” 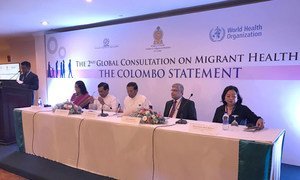 Against the backdrop of health systems struggling to adapt to the growing needs of migrants around the world, health leaders from over forty countries, meeting at a United Nations consultation underscored the call for international collaboration to improve the health and well-being of migrants and their families.