United Nations human rights experts are calling for strong, urgent action by States to ensure that people around the world can enjoy the human right to live in environments free from contamination.

“Air pollution is a major threat to human rights worldwide and toxic air pollutants are associated with an increased risk of disease from stroke, heart disease, cancer and respiratory diseases, including asthma,” the UN Special Rapporteur on human rights and hazardous substances and wastes, Baskut Tuncak, said in a news release issued today by the Office of the UN High Commissioner for Human Rights (OHCHR).

Three million deaths each year are linked to exposure to outdoor air pollution, according to estimates from the World Health Organization (WHO). There is also growing research evidence indicating that air pollution has become the leading environmental cause of death in the world.

“Children and people in vulnerable situations, including women of reproductive age, the elderly, those in poor health and those living in less wealthy communities remain the most vulnerable,” the experts warned.

According to the UN Children's Fund (UNICEF), 300 million children – almost one in seven of the world's total, live in areas with the most toxic levels of outdoor air pollution, a situation paediatricians describe as a 'silent pandemic.'

A threat like this can no longer be ignored

“A threat like this can no longer be ignored,” they said. “States have a duty to prevent and control exposure to toxic air pollution and to protect against its adverse effects on human rights.”

The experts said that impunity for those responsible for air pollution is rampant today, with recent reports of environmental ministers even denying its effects, in spite of overwhelming evidence to the contrary.

They stressed the need for cross-border cooperation to promote the adoption of preventive and control measures in the energy, industrial and transportation sectors, as well as the need for investment in infrastructures and long-term incentives. 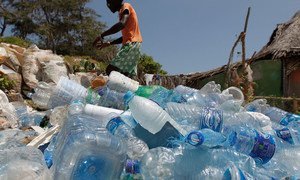 Launching an unprecedented global campaign, the United Nations Environment Programme (UNEP) is urging everyone to eliminate the use of microplastics and stop the excessive, wasteful use of single-use plastic, to save the world’s seas and oceans from irreversible damage before it’s too late.