The United Nations Security Council today extended for another year the mandate of the UN Integrated Peace-Building Office in Guinea-Bissau, known as UNIOGBIS, and urged all political actors in the country to implement the provisions of the Conakry Agreement signed last October.

The Council endorsed the Conakry Agreement – which carries the name of the Guinean capital where it was signed in 2016 following talks between political leaders, civil society and religious leaders – saying that “it offers a historic opportunity for national authorities and political leaders, as well as civil society, to jointly ensure political stability and build sustainable peace.”

The 15-members of the Council welcomed and supported a high-level mission to the country that is expected to be dispatched by the regional bloc Economic Community of Western African States (ECOWAS) as part of a follow-up for implementation of the Agreement.

Under its renewed mandate, which will begin on 1 March 2017 and run through at least 28 February 2018, UNIOGBIS will also continue to work with ECOWAS, its mission in Guinea-Bissau (ECOMIB) and other international partners to implement national security sector reform and strengthen the rule of law.

Among its primary responsibilities, the Council mandated the Office to focus its efforts on supporting an inclusive political dialogue and national reconciliation, and providing technical assistance to national authorities.

UNIOGBIS will also focus on supporting the Government of Guinea-Bissau in “mobilization, harmonization and coordination of international assistance,” with UN partners, the African Union (AU), the Community of Portuguese Language Countries (CPLC), ECOWAS, the European Union (EU). 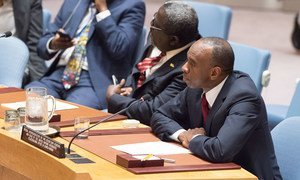 In the face of continued political crisis in Guinea-Bissau, a more sustained and well-coordinated approach is required to sustain economic gains, said the United Nations envoy for the country, calling for “faithful” implementation of a regionally-brokered road-map.