The United Nations refugee agency is focusing efforts on camp construction in and around the Iraqi city of Mosul, where renewed fighting could displace up to 250,000 people.

The United Nations refugee agency is focusing efforts on camp construction in and around the Iraqi city of Mosul, where renewed fighting could displace up to 250,000 people.

“With the predicted exodus of up to a quarter of a million people, it will be impossible to accommodate such large numbers on existing land,” said Matthew Saltmarsh, spokesperson for the Office of the UN High Commissioner for Refugees (UNHCR), at the regular press briefing in Geneva.

Almost 217,000 people have fled from the eastern sections of Mosul since the military offensive to oust Islamic State of Iraq and the Levant (ISIL/Da'esh) terrorists began on 17 October 2016. About 160,000 remain displaced while others have returned to their homes in the now Government-controlled areas.

The spokesperson said UNHCR has eight camps open or completed at present, and one under construction. “We are planning for the start of work at another site in Hamam Al Alil, south of Mosul,” he said.

The Iraqi Government has decided, initially, to transport people displaced from western Mosul to camps in the east while new capacity is being added in the south.

UNHCR has been asked to support a new site at Hamam Al-Alil, 20 km south of Mosul. It is expected that many of those fleeing western Mosul will reach there on foot. This site will provide shelter for up to 60,000 people.

According to reports and testimonies, conditions in the densely-populated west of the city are worsening, and hence concerns are mounting for the well-being of civilians. There are shortages of food, water, fuel and medicine. Half of all food shops have closed and most people can only access untreated water.

Food prices are skyrocketing and there are reports of families burning furniture, clothing and plastic to stay warm.

Mr. Saltmarsh said that during the battle for eastern Mosul, the protection of civilians was prioritized in military planning and activities, and UNHCR hopes this principle will continue to be upheld.

However, he added, the new battle will be different as the city's west is densely populated, with many narrow streets, and fighting will be street by street. Armed groups have built a network of tunnels.

Insecurity and recent suicide attacks in eastern Mosul have resulted in some families – who had opted to return to their homes – coming back to the camps in search of safety, he said. 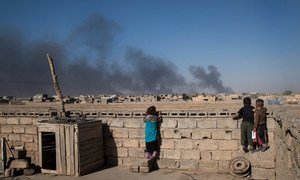 With military operations to retake western Mosul starting, United Nations humanitarian agencies in Iraq are rushing to prepare for the humanitarian impact of the fighting amid grave concerns that tens of thousands of families are at extreme risks.