MONUSCO peacekeepers interacting with members of the local population in North Kivu province, Democratic Republic of the Congo, during an area domination mission launched in Kingi to check out the present security situation. Photo MONUSCO/Force
16 February 2017

Increasingly concerned about the political impasse in the Democratic Republic of the Congo (DRC), the United Nations and regional partner organizations today urged political actors to work out how to implement the 31 December political agreement on a timeframe for elections.

The UN, the African Union (AU), the European Union (EU) and the International Organization of La Francophonie (IOF) today released a joint statement warning that the situation “has the potential to undermine the political goodwill” that led to the signing of the agreement in December.

“The four partner organizations note that six weeks after agreeing on the modalities of a transition period leading to the holding of peaceful and credible elections by December 2017, the parties are yet to conclude discussions on the effective implementation of the agreement,” according to the statement.

The agreement – facilitated by Conférence Episcopale Nationale du Congo (CENCO) mediators, and reached in DRC’s capital, Kinshasa, on 31 December 2016 – would result in new elections being held in the country before the end of the year and for President Joseph Kabila to step down.

In today’s statement, the four partner organizations reaffirm the need for all parties to rally behind the mediation efforts by CENCO, and urge all stakeholders “to redouble, in good faith” their efforts to conclude the ongoing talks.

A lack of implementation plans threaten to shake the “legitimacy of the transitional institutions until elections,” the partners said. 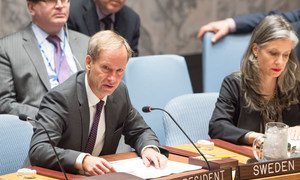