UN Photo/Eskinder Debebe
Nickolay Mladenov (shown on screen), UN Special Coordinator for the Middle East Peace Process and Personal Representative of the Secretary-General to the Palestine Liberation Organization and the Palestinian Authority, briefs the Security Council via video teleconference.
16 February 2017

Extremism, bloodshed and displacement continue to plague the Middle East, a senior United Nations envoy told the Security Council today, warning that these phenomena are feeding intolerance, violence, and religious radicalism far beyond the region.

drift into the abyss of the extremism and radicalism sweeping the region,” said Nickolay Mladenov, the UN Special Coordinator for the Middle East Peace Process, briefing the Security Council.

“Palestinians, Israelis and the international community have a duty to act responsibly, avoid escalating tensions, refrain from unilateral actions and work together to uphold peace,” he added.

He also drew attention of the Council members to the recently adopted so called “Regularisation Law” which has the potential to retroactively regularise thousands of existing settlement units built on land owned by Palestinian individuals living under occupation, as well as dozens of illegal outposts.

Noting that the “Regularisation Law” is in contravention of international law and that according to the Israeli Attorney General it is also unconstitutional, Mr. Mladenov told the Council that the Supreme Court is expected to rule on its constitutionality soon.

“If the Law stays in place, it will have far-reaching consequences for Israel, while seriously undermining prospects for the two-state solution and for Arab-Israel peace,” he cautioned.

Also in his briefing, the UN envoy expressed concern over daily violence and so-called “lone wolf” attacks against Israeli civilians. In one such recent incident, six Israelis were injured in a shooting and stabbing attack by an 18-year-old Palestinian from Nablus (a city in northern West Bank).

He further told the Security Council members that the volatile situation in Gaza continued to exacerbate humanitarian and development challenges, related in large part to the crippling closures of the Strip and the continuing political divide.

“This winter has borne witness to a serious electricity crisis which in December left Palestinians in Gaza with only two hours of electricity per day,” he said, informing them of UN’s work to address the electricity challenges in a sustainable manner.

He also spoke of the situation in the UN Interim Force in Lebanon (UNIFIL) and the UN Disengagement Observer Force (UNDOF) areas of operations, noting that the ceasefire between Israel and Syria (under UNDOF area of operations) is holding, albeit in a volatile security environment.

Concluding his briefing, the UN envoy recalled that the Middle East Quartet Report and Security Council resolutions clearly outlined what is required to advance a sustainable and just peace in the region.

“The two-state solution remains the only way to achieve the legitimate national aspirations of both peoples,” he said, noting that Israel can take the necessary step to stop settlement expansion and construction in order to preserve this prospect, while the Palestinian leadership can demonstrate their commitment to tackling the challenges of violence and incitement on their side.

“This will create an environment that will facilitate bilateral final status negotiations that the international community can support,” he added. 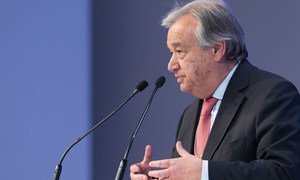 United Nations Secretary-General António Guterres today deeply regretted the adoption by Israel’s legislative body, the Knesset, of the so called “Regularisation bill,” saying the measure contravenes international law and will have “far-reaching legal consequences” for the country.