UNMISS/Isaac Billy
Special Representative and head of the UN Mission in South Sudan (UNMISS), David Shearer (right), makes his first field trip to the town of Malakal, since taking up his post a month ago.
16 February 2017

The top United Nations peacekeeping official in South Sudan has described the lack of information about the situation of some 20,000 internally displaced people on the west bank of the Nile in the country’s north, as a “real problem.”

“We want to find out what has happened to those people, and provide them with assistance if they need it,” said David Shearer, the Secretary-General’s Special Representative and head of the UN Mission in South Sudan (UNMISS), who was making his first field trip to the town of Malakal after taking up his position as Mission chief four weeks ago.

According to a press statement issued today by the office of the Mission’s spokesperson, UNMISS believes that the 20,000 people have fled towards Kodok from Wau Shilluk, a town eight miles north of the UN base in Malakal on the west bank of the River Nile.

Fighting between the Government Sudan People's Liberation Army (SPLA) forces and opposition forces has expanded geographically across the west bank over the past week, and shows no signs of abating, forcing more people to flee their homes.

On Thursday, UN peacekeepers attempted to carry out a foot patrol to Wau Shilluk, but were prevented from doing so by SPLA soldiers located at Wau Shilluk, a situation Mr. Shearer described as “very frustrating.”

Meanwhile, the statement noted that UNMISS has described government relocations by air of internally displaced people through Juba into Malakal as unsustainable if they are not also supported with humanitarian assistance on arrival.

The Shilluk population of Malakal has abandoned the town and 33,000 people are currently taking refuge in the camp administered by UNMISS. 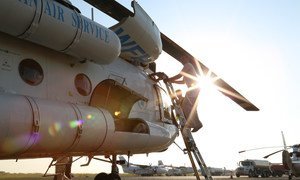