“Agriculture holds the key to solving two of the greatest problems now facing humanity: eradicating poverty and hunger, and contributing to maintaining the stable climatic conditions in which civilization can thrive,” Food and Agriculture Organization Director-General José Graziano da Silva told a roundtable on climate change during the in Dubai.

The FAO Director-General stressed in particular the need to support small farmers in the developing world adapt to climate change.

“But farmers face major barriers, such as the lack of access to credit and markets, lack of knowledge and information, insecurity about land tenure, and high transaction costs of moving away from existing practices,” the Director-General said.

For example, he said, 70 countries do not have established meteorological services. FAO is working with the World Meteorological Organization (WMO) to develop low-cost, farmer friendly services to address this need.

Ultimately, ‘an ounce of prevention is worth a pound of cure,’ he argued.

One critical front for action is water management, said Mr. Graziano da Silva. Millions of the world’s small-scale farmers are already wrestling with water scarcity, which will likely intensify as a result of climate change, he said.

This is why at the last UN climate change conference FAO and partners launched a global framework on water scarcity in agriculture that aims to support developing countries in bringing stronger policies and programmes for the sustainable use of water in agriculture online, he explained.

♦ Receive daily updates directly in your inbox - Subscribe here to a topic.
♦ Download the UN News app for your iOS or Android devices.
sustainable development goals|agriculture and food security 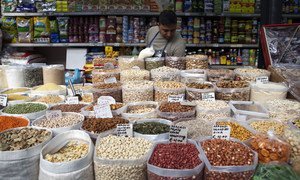