Secretary-General António Guterres and the United Nations Security Council today voiced strong opposition to the latest ballistic missile launch by the Democratic People's Republic of Korea, calling on Pyongyang to fully comply with its international obligations to denuclearize.

“The Secretary-General strongly condemns the launch of another ballistic missile by the Democratic People's Republic of Korea (DPRK) on 12 February,” his spokesperson said in a statement.

The launch “is a further troubling violation” of Security Council resolutions, including resolution 2321 (2016) which strengthened sanctions against the regime.

The Secretary-General urged the DPRK leadership to return “to the path of denuclearization;” while appealing to the international community to continue addressing the in a united manner.

VIDEO: Secretary-General António Guterres says that the launch of ballistic missile by DPRK is a violation of Security Council resolutions, and calls on Pyongyang to fully comply with its international obligations. Credit: UN News

In a statement to the press issued after urgent closed-door talks this afternoon, the Security Council also strongly condemned the most recent ballistic missile launches conducted by the DPRK on 11 February 2017, as well as 19 October 2016.

Denouncing the launches as grave violations of the country's international obligations, the Council also noted that such activities contribute to the DPRK's development of nuclear weapons delivery systems and increase tension.

The members of the Security Council further regretted that the DPRK is diverting resources to the pursuit of ballistic missiles while the country's citizens “have great unmet needs.”

Expressing serious concern that the DPRK conducted these ballistic missile launches after the 15 April, 23 April, 27 April, 28 April, 31 May, 21 June, 9 July, 18 July, 2 August, 23 August, 5 September, and 14 October launches, as well as the nuclear test of 9 September, in flagrant disregard of its repeated statements, the Council reiterated that the country shall refrain from further such actions.

The Council reiterated the importance of maintaining peace and stability on the Korean Peninsula and in north-east Asia at large and welcomed efforts by Council members, as well as other States, to facilitate a peaceful and comprehensive solution through dialogue. It also stressed the importance of working to reduce tensions in the Korean Peninsula and beyond.

The members of the Council agreed to continue close monitoring of the situation and to take further significant measures, in line with the Council's previously expressed determination. 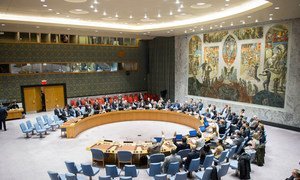