Top officials from the United Nations and the international community today applauded two decades of efforts to protect children from the scourge of war by marking the 20th anniversary of General Assembly resolution 51/77 (1997) on promotion and protection of the rights of children.

Top officials from the United Nations and the international community today applauded two decades of efforts to protect children from the scourge of war by marking the 20th anniversary of General Assembly resolution 51/77 (1997) on promotion and protection of the rights of children.

In an informal meeting of the 193-member Assembly in New York, the UN body’s President, Peter Thomson, called the resolution “a landmark development in our global efforts to improve the protection of children in conflict situations.”

“Among the incomprehensible horrors that take place in the chaos of warzones, unconscionable crimes, violations, exploitation and abuse are perpetrated against the most vulnerable members of our societies – namely our children,” Mr. Thomson said.

He called for a concerted effort to protect children in armed conflict as part of the international community’s commitments to peace and security, sustainable development and human rights.

It was Ms. Machel’s landmark report back in 1996 that led to the creation of the mandate and the appointment of a Special Representative. 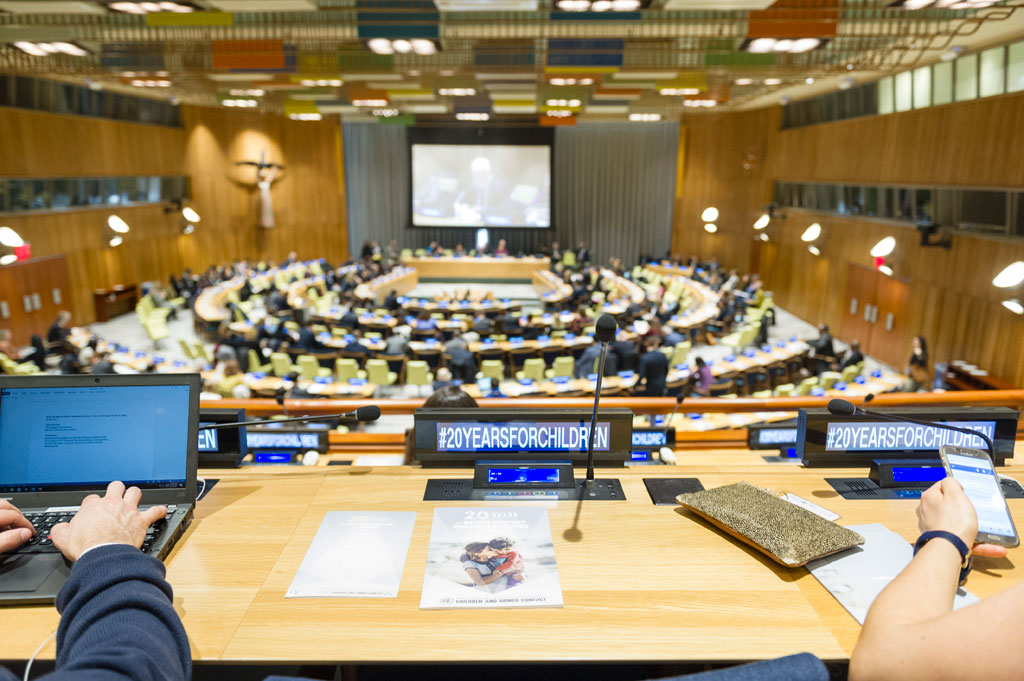 A view of the Trusteeship Council Chamber during the General Assembly informal meeting to commemorate the 20th anniversary of the mandate of the Special Representative of the Secretary-General for Children and Armed Conflict. UN Photo/Rick Bajornas

She urged Member States to consider children as “zones of peace” and said that by focusing on them, “politicians, Governments, the military and non-State entities will begin to recognize how much they destroy through armed conflict, and therefore, how little they gain.”

The best way to protect children from armed conflict is to prevent armed conflict in the first place, Ms. Machel wrote. That idea was echoed in the message of Secretary-General António Guterres, delivered by his Chef de Cabinet, Maria Luiza Ribeira Viotti.

The Secretary-General identified good quality education and productive, decent work for young people as prerequisites for both peace and development.

When prevention fails, however, he called on the Special Representative’s Office to continue monitoring and reporting violations to promote informed and timely action.

“We also need to continue to and strengthen engagement with local and national authorities, regional partners, and civil society to prevent and protect children from grave violations,” Mr. Guterres said.

The Office of the Special Representative has over the years worked with other UN agencies, notably the UN Children’s Fund (UNICEF) to protect children in conflict areas.

Among the joint projects is the Children, Not Soldiers campaign, which aims to end the recruitment and use of child soldiers by Government armies. Since 2000, the work of the Office and partners has led to the release of more than 115,000 child soldiers.

“Children don’t belong on the battlefield, they belong in school where they can build a future,” said UNICEF Executive Director Tony Lake, who participated in the event.

Assistant-Secretary-General Miroslav Jenca, who represented the UN Department of Political Affairs, a key partner of Ms. Zerrougui’s Office, reiterated the importance of integration to protect children.

For example, he highlighted the utility of a checklist for drafting children and armed conflict provisions developed with UN and partners, as a useful tool for mediators.

AUDIO: There is no "band aid" solution to rehabilitating and reintegrating former child soldiers, Ilwad Elman, Director of Programs and Development at the Elman Peace and Human Rights Centre in Somalia, told UN News.

The senior United Nations advocate for children caught up in conflict is reaching out to parents, elders, and the entire international community to keep children away from armies and militias – a UN role that over the past two decades has helped more than 115,000 child soldiers regain their youth.