Female genital mutilation denies women and girls their dignity and causes needless pain and suffering, with consequences that endure for a lifetime and can even be fatal, United Nations Secretary-General António Guterres has said, stressing that the UN Sustainable Development Agenda promises an end to this practice by 2030.

“On this Day of Zero Tolerance, let us build on positive momentum and commit to intensifying global action against this heinous human rights violation for the sake of all affected women and girls, their communities and our common future,” the Secretary-General said in a message on the International Day, marked annually on 6 February to strengthen momentum towards ending the practice of female genital mutilation, globally recognized as a violation of the human rights of girls and women.

Despite a significant an overall decline in the prevalence of the practice, widely referred to by the acronym FGM, the United Nations warns that this progress is likely to be offset as the population grows in countries where female genital mutilation is practiced, and without beefed up efforts to eliminate it, more girls will be cut.

In a blog post on the occasion of the International, Phumzile Mlambo-Ngcuka, the Executive Director of UN Women, wrote: “The cutting and sewing of a young child's private parts so that she is substantially damaged for the rest of her life, has no sensation during sex except probably pain, and may well face further damage when she gives birth, is to many an obvious and horrifying violation of that child's rights.”

“It is a kind of control that lasts a lifetime,” she continued. “It makes a mockery of the idea of any part being truly private and underlines the institutionalized way in which decisions over her own body have been taken from that girl – one of some 200 million currently.”

The main reason that FGM continues – as it does in some 30 countries across three continents – is out of a desire for social acceptance and to avoid social stigma, according to a 2016 report by the Secretary-General .

“The hidden nature of the support for ending the practice slows down the process of abandonment,” the authors wrote.

Underlining that the Sustainable Development Goals (SDGs), adopted in 2015 and now heading their second year of implementation, recognized the close connection between FGM, gender inequality, and development – and reignited global action to end the practice by 2030, heads of UN Children's Fund (UNICEF) and UN Population Fund (UNFPA) called for faster action to achieve this commitment.

“It means creating greater access to support services for those at risk of undergoing FGM and those who have survived it,” said UNICEF Executive Director Anthony Lake and UNFPA Executive Director Babatunde Osotimehin in a joint statement.

“It also means driving greater demand for those services, providing families and communities with information about the harm FGM causes – and the benefits to be gained by ending it,” they added.

Calling on governments to enact and enforce laws and policies that protect the rights of girls and women and prevent FGM, they urged everyone to make this the generation that abolishes FGM once and for all – and in doing so, helps create a healthier, better world for all.

UNFPA, jointly with UNICEF, leads the largest global programme to accelerate the abandonment of FGM. The programme currently focuses on 17 African countries and also supports regional and global initiatives.

The theme of the 2017 edition of the International Day is: 'Building a solid and interactive bridge between Africa and the world to accelerate ending FGM by 2030.'

In Colombia, for example, some members of the Emberá, a historically impoverished and marginalized indigenous group, continue the practice. The practice is done quietly, so there are few reliable statistics. The Colombian National Indigenous Organization (ONIC) estimates that two out of three Emberá women have been cut, according to information used by the UNFPA.

But in 2007, after two girls died from infections caused by FGM, some women tribal members began being more vocal about the practice.

“In the beginning, it was really difficult,” Solani Zapata told UNFPA. “Nobody wanted to talk about the subject.”

Slowly people began to open up, leading to conversations about related issues, including gender-based violence.

Girls who undergo the practice are less likely to finish school, have limited formal employment prospects and are more likely to be married to an older man and become pregnant early in life.

The practice has since been abandoned in many communities.

“We don't do it here anymore,” said Amanda Guasiruma Gaisama, in Valle del Cauca. “The adults know that if it's done here and something happens to the girl, there are consequences… We know it is not normal for a girl, even if it's part of a tradition.”

To raise awareness about the negative impact of FGM, the UN Population Fund (UNFPA) is holding Facebook Live programming all day today. Watch live at facebook.com/UNFPA. 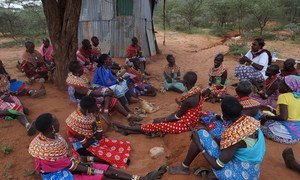