UNICEF/Aleksey Filippov
On 1 February 2017, sisters Vika and Yulia are waiting in a bus to be evacuated from the town of Avdiivka, Donetsk region of Ukraine. Following intense fighting at the end of January 2017, more than 17,000 people are facing freezing weather without any heating, electricity or water.
3 February 2017

An immediate pause in fighting is needed in Ukraine to prevent more people dying and repair essential services, the United Nations human rights office said today following another night of shelling in the east of the country.

United Nations Secretary-General António Guterres also expressed deep concern about the ongoing tensions and intensification of the fighting in eastern Ukraine, according the UN chief’s spokesperson, who said he appealed to all parties to fully observe the ceasefire and allow for immediate humanitarian access.

In the last week, aerial attacks have killed seven people and injured at least 40 more in heavily populated areas, according to the Office of the UN High Commissioner for Human Rights (OHCHR).

“Reports suggest that two hospitals, a polyclinic, a dental clinic, three schools, and a kindergarten were damaged by shelling in Makiivka and Donetsk city, which are controlled by armed groups,” OHCHR spokesperson Liz Throssell told reporters at the regular bi-weekly news briefing in Geneva.

She said OHCHR staff in Donetsk heard explosions over five days, from 29 January through the night of 2 February, and on 2 February, “saw a clearly marked ambulance in Donetsk that had been damaged by shrapnel.”

Latest data shows that at least 9,800 civilians and members of armed forces have been killed since the conflict began in mid-April 2014 according to the UN Human Rights Office.

It also warns that sub-zero temperatures have also left civilians even more vulnerable amid the destruction of power lines and disruption to water, electricity and heating networks.

Ms. Throssell explained that critical civilian infrastructure has been damaged, including near Avdiivka, where power lines have been destroyed, disrupting water, electricity and heating supplies. Gas and electricity supplies were also reported to have been affected in Makiivka and other areas under the control of armed groups, including Irmino and parts of Donetsk.

“Both Government forces and armed groups must take all feasible measures to protect the civilian population in the areas under their control, she said, adding: “We remind them that the protection of civilians must be considered the utmost priority and those committing violations of human rights law and international humanitarian law must be held accountable.” 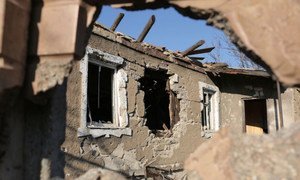 Briefing the Security Council on the situation in eastern Ukraine, the top United Nations political and humanitarian officials underlined today that continuing fighting in the region, with only short periods of respite, have exasperated human suffering.