Condemning attacks on civilians and non-governmental organizations in a town in Central African Republic (CAR)’s Ouham-Pendé province, a senior United Nations humanitarian official has called for protecting civilians as well as for unhindered relief access to the affected areas.

According to the office of the Humanitarian Coordinator in CAR, outbreak of violence between two armed groups in the town of Bocaranga reportedly killed and injured civilians as well as displacing some 9,000 people are sheltering in forests about 15-20 kilometres away from the town.

In the clashes, international non-governmental organization compounds were attacked and pillaged and at-least one office was burnt down. Moreover, shops and markets were “systematically pillaged,” as was one church.

“I urge all parties to the conflict to respect international humanitarian law and to ensure the protection of civilians,” said Michel Yao, the Acting Humanitarian Coordinator in the country.

“Attack against aid workers is a crime against humanity,” he added.

Prior to the latest flare-up of violence there were already 15,000 persons from Koui (located about 35 kilometres east of Bocaranga) who were displaced the town due to the violence that occurred there last September.

These displacements come on the back of already more than 400,000 persons displaced due to conflict.

The humanitarian needs in CAR are increasing while financial resources remain scarce.

In January, together with the Government, the humanitarian community in CAR launched a $400 million response plan for the 2017-2019 period to meet the basic needs of 2.2 million people. 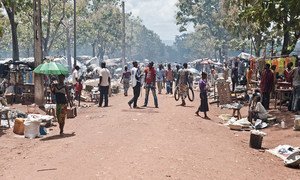 Amid rising tensions in Central African Republic’s Ouaka prefecture and in and around its town of Bambari, a senior UN humanitarian official in the country has appealed for calm and refraining from any act that could further increase the fragility of an already vulnerable population.