<a href=http://bit.ly/1IZPI61>Annie Slemrod/IRIN</a>
Construction in the Israeli settlement of Ariel in the West Bank.
3 February 2017

A United Nations human rights expert has called on the Security Council and the General Assembly to explore effective diplomatic and political measures to ensure Israeli compliance with Security Council resolution 2334 (2016), which affirms that all Israeli settlements in the occupied Palestinian territory constitute a flagrant violation of international law.

A United Nations human rights expert has called on the Security Council and the General Assembly to explore effective diplomatic and political measures to ensure Israeli compliance with Security Council resolution 2334 (2016), which affirms that all Israeli settlements in the occupied Palestinian territory constitute a flagrant violation of international law.

“The settlement announcements by the Israeli Government, only a month after the clear direction of the international community, are a defiant and troubling repudiation of resolution 2334,” said Special Rapporteur Michael Lynk, who is mandated by the UN Human Rights Council to monitor and report on the situation of human rights in the Palestinian territories occupied since 1967.

“If Israel understands that the international community will take no meaningful steps to enforce the Council’s resolution, it will continue to intensify its settlement project undeterred,” the Rapporteur warned in a news release issued by the Office of the UN High Commissioner for Human Rights (OHCHR).

“And if the international community intends to preserve what remains of a viable two-state solution, it must not assume that resolutions, critical statements and international conferences alone will change state behaviour in these circumstances,” he stressed.

The human rights expert’s appeal comes as, according to the press release, the Israeli Government approves the construction of over 6,000 new settlement homes in the occupied West Bank and East Jerusalem, and as the Israeli Knesset moves closer to adopting the ‘Settlement Regularization Bill,’ which will legalize the homes of more than 4,000 settlers in dozens of illegal outposts built on private Palestinian lands throughout the West Bank.

“The policies and practices of the Israeli authorities that suggest an advance towards de facto annexation of parts of the West Bank are increasingly alarming,” the expert said.

“Annexation of occupied land likewise is a grave breach of international law,” the Rapporteur stated. 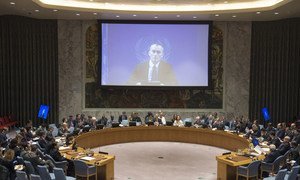 Unilateral actions threaten to unravel the two-state solution between Israelis and Palestinians, the United Nations focal point on the Middle East today told the Security Council, stressing that both sides must do their part to create the necessary conditions to launch direct negotiations.