New guidance from the World Health Organization (WHO), released ahead of World Cancer Day which is marked annually on 4 February, tries to inform the public about the different symptoms of cancer so that they can get care and to provide safe and effective treatment.

“Diagnosing cancer in late stages, and the inability to provide treatment, condemns many people to unnecessary suffering and early death,” said Dr. Etienne Krug, Director of WHO's Department for the Management of Noncommunicable Diseases, Disability, Violence and Injury Prevention.

“By taking the steps to implement WHO's new guidance, healthcare planners can improve early diagnosis of cancer and ensure prompt treatment, especially for breast, cervical, and colorectal cancers,” he stressed.

Each year, 8.8 million people die from cancer, mostly in low- and middle-income countries, according to WHO figures. The figure is so high that is accounts for two and a half times more people killed than those who die from HIV/AIDS, tuberculosis and malaria combined.

It is estimated that by 2030, more than two-thirds of all cancer-related deaths will be in developing countries. 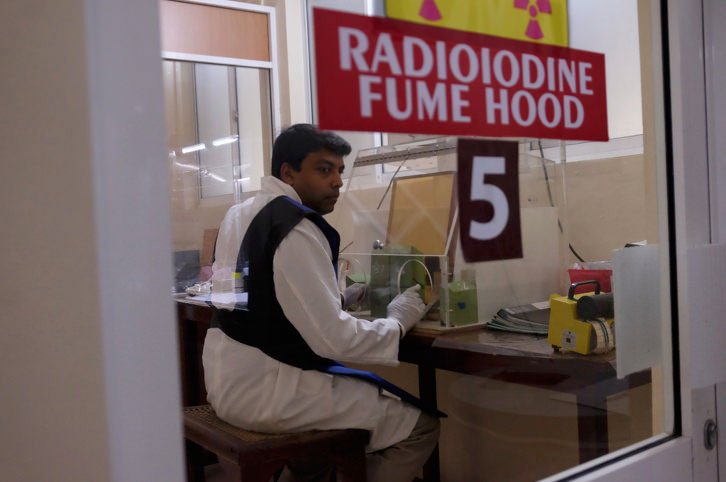 A Sri Lankan expert, trained at the IAEA laboratories in Seibersdorf, Austria, checking the iodine-131 dose to be given to thyroid cancer patients at the Nuclear Medicine Unit in Peradeniya, Sri Lanka. Photo: IAEA

Early detection can also cut the cost of treatment. In 2010, the total annual economic cost of cancer through healthcare expenditure and loss of productivity was estimated at $1.16 trillion.

According to WHO, studies in high-income countries have shown that treatment for cancer patients who have been diagnosed early are two to four times less expensive compared to treating people diagnosed with cancer at more advanced stages.

The third step to WHO's early diagnosis is strengthening and equipping health services and training workers, according to the guidance released today.

There is an estimated shortage of 5,000 radiotherapy machines throughout the world, the International Atomic Energy Agency (IAEA) has said.

Among African countries, for example, 80 per cent of the estimated population of one billion is without access to radiotherapy and related cancer services.

Reducing early deaths from cancer and other chronic disease by one-third is stipulated in the Sustainable Development Goals (SDGs), which the international community agreed to try to reach by 2030.

Given the need for greater equipment and training, Mr. Amano noted that he is considering devoting the IAEA Scientific Forum in September to exploring the benefits of nuclear medicine and radiation technology for human health.

Improving access to effective cancer treatment in developing countries has been one of his key priorities since taking lead of IAEA in 2009, Mr. Amano said. He outlined a number of successes the UN agency has had in Africa, particularly.

“In Ghana, for example, we provided diagnostic equipment for child cancers,” Mr. Amano noted. “We helped Nigeria to develop its institutions and infrastructure for fighting cancer, and provided training for dozens of oncology, nuclear medicine and radiotherapy professionals.”

He noted also specialist training, including online resources, such as the Virtual University for Cancer Control which enables medical professionals in Africa to train for free, or the Human Health Campus website for professionals in nuclear medicine and related fields.

Noting that cervical cancer kills more than 250,000 women every year and that 85 per cent of these deaths occur in low- and middle-income countries, the United Nations health agency underlined the importance of vaccinating girls against the cancer-causing virus and screening programmes to detect and treat precancerous lesions.