UNHCR/A. d'Amato
Risking their lives to reach Europe from North Africa, a boatload of people, some of them likely in need of international protection, are rescued in the Mediterranean Sea by the Italian Navy.
2 February 2017

Ahead of a meeting of the European Council, the United Nations refugee and migration agencies have called on European leaders to take “decisive action” to save lives of migrants and refugees attempting to cross the Mediterranean Sea along its central route in hopes of a better future.

“To better protect refugees and migrants, we need a strong European Union that is engaged beyond its borders to protect, assist and help find solutions for people in need,” said the Office of the UN High Commissioner for Refugees (UNHCR) and the International Organization for Migration (IOM) in a joint statement today.

Such efforts, they noted, should include building capacity to save lives at sea or on land, strengthening the rule of law and fighting against criminal networks.

The agencies also expressed hope that the meeting, to be held tomorrow, will also help move towards the adoption of a common approach to migration by the European Union.

They also appealed for addressing “deplorable conditions” for refugees and migrants in Libya and called for concerted efforts to ensure that sustainable migration and asylum systems are established in the country and in neighbouring countries.

“This should include a significant expansion of opportunities for safe pathways such as resettlement and humanitarian admission, among others, to avoid dangerous journeys,” the noted, urging to shift away from migration management based on “automatic detention of refugees and migrants.” 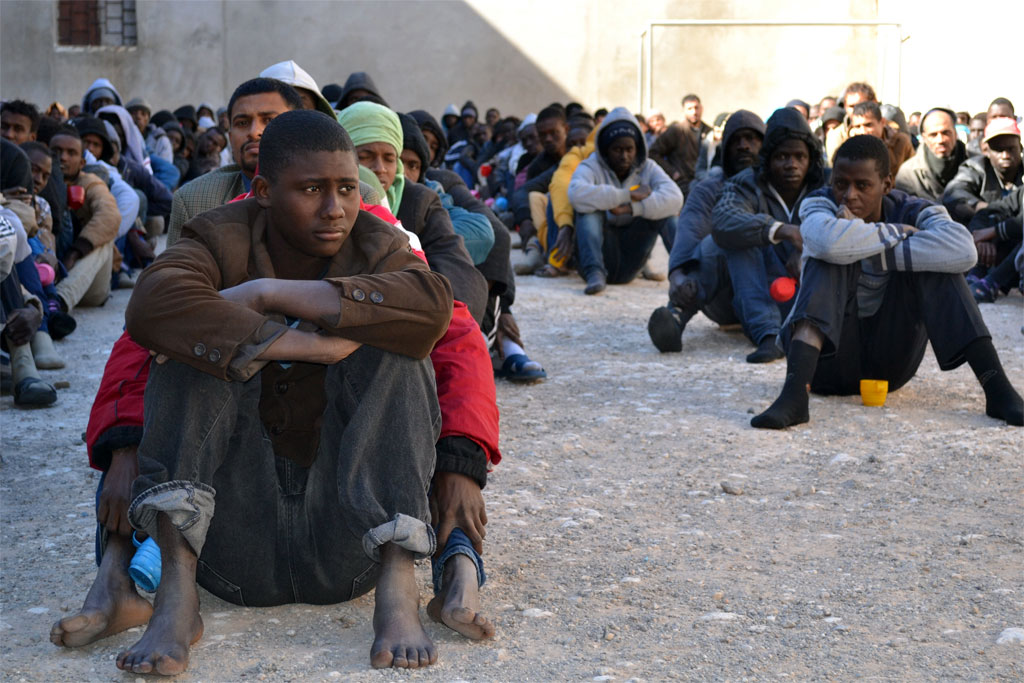 Migrants at a detention centre in the city of Zawiya, Libya. Photo: Mathieu Galtier/IRIN

In this context, UNHCR and IOM underlined the need for creating proper reception services and building capacity to register new arrivals, support the voluntary return of migrants, process asylum claims and offer solutions to refugees.

Further, stating that they, together with partners on the ground, have made “tremendous effort” to deliver basic protection not only to refugees and migrants but also to affected local populations, which in some places are also in dire need of assistance, the UN agencies, however, expressed worry that security constraints continued to hinder their efforts.

They also outlined that given the current context, “it is not appropriate to consider Libya a safe third country nor to establish extraterritorial processing of asylum-seekers in North Africa.”

Expressing hope that humane solutions can be found end the suffering of thousands of migrants and refugees in Libya and across the region, the agencies added: “We stand ready to assist and enhance our engagement, conditions permitting.”

Last year, 2016, was the worst year in terms of people perishing while attempting to cross the Mediterranean Sea. According to preliminary figures from UNHCR, of the 363,348 people who crossed the sea, 5,079 people – almost 1 in 72 – were lost (died or missing).

Noting that the number of children arriving in Italy by themselves via the sea in 2016 more than doubled over the previous year, the United Nations Children’s Fund (UNICEF) today called for urgent and special measures to protect them from trafficking, exploitation and abuse.