Calling on the Government of Iran to immediately halt the execution of a juvenile offender whose trial was reportedly marred with lack of due process and fair trial guarantees, a group of United Nations human rights experts have urged the authorities to adopt a moratorium on juvenile executions.

According to the Office of the UN High Commissioner for Human Rights (OHCHR), the offender, Hamid Ahmadi, was 17 years old when he was sentenced to death in 2009 for the fatal stabbing of a young man in a fight between five boys, the year before. The court relied on confessions reportedly obtained under torture and ill-treatment at a police station. Mr. Ahmadi was also denied access to a lawyer and his family.

“To our knowledge, in the case of Hamid Ahmadi, the most stringent guarantees of fair trial and due process contained in international human rights instruments have been disrespected and, the allegations of torture and confessions extracted under duress were not taken into consideration nor did the lead to any investigation,” the human rights experts said.

“Any death sentence undertaken in contravention of a Government's international obligations, and particularly when a conviction is based on confessions extracted under torture, is unlawful and tantamount to an arbitrary execution,” they stressed.

Mr. Ahmadi's execution, planned to take place – by hanging – on Saturday, 4 February, is the third time it has been scheduled. In the two previous instances, they were halted at the last minute.

Any death sentence undertaken in contravention of a Government's international obligations, and particularly when a conviction is based on confessions extracted under torture, is unlawful and tantamount to an arbitrary execution

Furthermore, following the adoption (in 2013) of new juvenile sentencing provisions of the Islamic Penal Code, Mr. Ahmadi was granted a retrial but was eventually re-sentenced to death by a Provincial Criminal Court in December 2015.

Unprecedented rate of scheduling and even conducting executions of juveniles

The experts also condemned that execution of juveniles continue to be scheduled and even conducted at an unprecedented rate in the country since the beginning of the year.

“On 17 January, we already intervened to halt the execution of another juvenile,” they noted.

“Since then, we have learned that two other juveniles have been hanged on 15 and 18 January. Arman Bahr Asemani and Hassan Hassanzadeh were both juveniles at the time they allegedly committed the offence for which they were sentenced to death.”

Underlining that that international standards unequivocally forbid the imposition and execution of the death penalty on persons below 18 years of age, the UN experts urged Iran to observe its international obligations by putting an end to the execution of juvenile offenders “once and for all.”

Independent experts and Special Rapporteurs are appointed by the Geneva based UN Human Rights Council – an inter-governmental body responsible for promoting and protecting human rights around the world – to examine and report back on a specific human rights theme or a country situation. The positions are honorary and the experts are not UN staff, nor are they paid for their work. 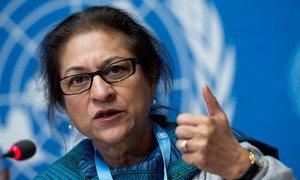 Raising alarm over the health of several prisoners of conscience in Iran, who have been on a prolonged hunger strike contesting the legality of their detention, the United Nations expert on the human rights situation there urged the authorities to “immediately and unconditionally” release all those who have been arbitrarily arrested, detained and prosecuted for exercising their rights.