From avian flu to locusts and E. coli bacteria, food is contaminated every day by diseases and pests, leading the United Nations agricultural agency to create a set of emergency prevention tools to save lives and improve food safety and security.

“We believe it's important for sectors involved in food production, processing and marketing to watch out for current and potential threats and respond to them in a concerted manner,” said the Assistant Director-General of the Food and Agriculture Organization (FAO), Ren Wang.

The UN agency, in the recently published “Averting risks to the food chain”, show that preventing, early warning, preparedness, good food chain crisis management and good practices can help to stop the diseases and pests that ravage food chains.

One of the key messages from the report is that an integrated approach – which covers all the stages from prevention to timely response – is needed to curb food chain crises caused by transboundary animal diseases to plant pests and diseases.

Among the biggest pests that the FAO is focusing on is the desert locust, which affects more than 65 per cent of the world's poorest countries and is considered the most dangerous of all migratory pest species in the world.

Able to consume its own weight in fresh food per day, a typical 1 km size swarm of locusts – or roughly 40 million locusts – can eat the same amount as 35,000 people, 20 camels or six elephants.

The FAO is using the eLocust3 system, which records and transmits data from crop pest monitoring in good time, to improve monitoring and prevention of locusts in 19 of the most vulnerable countries.

Meanwhile, in Mali, Uganda and Tanzania, livestock farmers are using the EMA - i app to collect animal disease information from the field on their smartphones. The data is sent in real-time to the Global Animal Disease Information System (EMPRES-i) at FAO, where it is shared at national, regional and global levels, facilitating analysis in a timely manner in order to provide a very rapid response to attack the disease at the very early stage of birth.

Another tool in the FAO report is sharing information through regional veterinary lab networks in Africa and Asia. There are 32 labs in African countries and 17 in Asian countries. By working more closely together, scientists can trace the outbreak and prevent it from infecting animals in other countries in the region.

Given that a third of global crop production is lost annually due to insects and plant diseases that can spread to multiple countries and through continents, by sharing information, experts can develop standardized protocols and train response workers regionally, as well as have international standards for any tests. 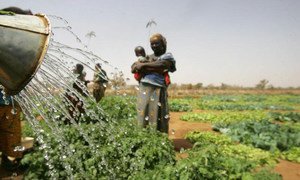 Highlighting the challenges associated with the inextricable links between water and food – the so-called ‘water-food nexus’ – for food security, as well as for sustainable development, the United Nations agricultural agency today outlined steps that can be taken to improve water sustainability for current and future needs.