WFP/Abeer Etefa
A reminder of the deadly destruction in the conflict in Mykolaivka in the Donetsk region of eastern Ukraine.

31 January 2017
Amid outburst of violence in Ukraine, the United Nations Security Council and the top humanitarian official there expressed grave concern today about the “dangerous deterioration” of the situation in the country’s eastern region and its severe impact on the local civilian population.

In a press statement, Council members condemned the use of weapons prohibited by the Minsk agreements along the contact line in Donetsk region that lead to deaths and injuries, including among civilians.

The members of the Security Council expressed their full support of sovereignty and territorial integrity of Ukraine and underlined the need for strict compliance with resolution 2202 (2015), which endorsed the “Package of measures for the Implementation of the Minsk Agreements,” aimed at ending the violence in eastern regions of Ukraine.

“The members of the Security Council called for an immediate return to a ceasefire regime,” the statement concluded.

Earlier in the day, the humanitarian community and the Humanitarian Coordinator in the country also expressed grave concern by the “drastic deterioration” of the security situation in eastern Ukraine and its humanitarian consequences.

In a statement issued by the UN Office for the Coordination of Humanitarian Affairs, the UN and its aid partners in the county expressed particular concern about the impact on the civilian population on both sides of the ‘contact line.’”

Casualties continue to be recorded. Sustained targeting of and damages to civilian infrastructure adds to the already difficult conditions. This situation, they said, is exacerbated by the harsh winter, and may have irrevocable consequences. “The Government of Ukraine is doing its outmost to provide support and to coordinate humanitarian efforts.”

The humanitarian community stressed that due to the shelling, the Donetsk Filter Station (DFS) stopped working on yesterday, leaving some 15,000 to 17,000 people in Avdiivka without water, and potentially affecting up to 400,000 people served by the facility.

Moreover, on 30 January the fourth power line to the Avdiivka coke plant was damaged by shelling, leaving it without power, and further impacting on the supply of hot water. Urgent repairs are needed to restart the heating system. With temperatures falling well below -10 degrees Celsius, should the heating system stop working it will freeze and will require weeks to restart.

In Donetsk, city water is being redistributed from Verkhniokalmiuska Filter station, and other cities are surviving by using local water reservoirs designed to provide 24 hours of storage. In villages such as Vasylivka, Spartak, Verkhnotoretske and Kruta Balka water delivery has stopped altogether, and in part of Yasynuvata water is now cut.

“An immediate cessation of hostilities is urgently needed to prevent further loss of lives and to enable repair teams to urgently restore critical basic services to hundreds of thousands of affected civilians living in -10 below zero temperature,” said Humanitarian Coordinator Neal Walker. 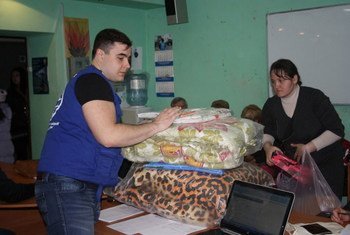 Millions in Ukraine are in need of humanitarian assistance, UN relief wing reports

30 December 2016
According to the United Nations Office for the Coordination of Humanitarian Affairs (OCHA), an estimated 3.8 million people in Ukraine are in need of humanitarian assistance and 2.2 million are suffering as a result of no access to quality health services.