UNICEF/Delil Soulaiman
Displaced children and adults in Syria are seen in a vehicle after fleeing from ISIL-controlled areas in rural Raqqa to Ain Issa, the main staging point for displaced families, some 50 kilometres north of Raqqa city.
28 January 2017

“The needs of refugees and migrants worldwide have never been greater, and the US resettlement programme is one of the most important in the world,” says a joint statement from the Office of the UN High Commissioner for Refugees (UNHCR) and the International Organization for Migration (IOM).

The agencies note that the longstanding US policy of welcoming refugees has created a 'win-win' situation: it has saved the lives of some of the most vulnerable people in the world who have in turn enriched and strengthened their new societies.

“The contribution of refugees and migrants to their new homes worldwide has been overwhelmingly positive,” they add.

The statement from the agencies follows President Donald Trump's signing this past Friday of an Executive Order that, among things, reportedly suspends the US refugee programme for 120 days and, according to the media, bars entry of refugees from several mostly Muslim countries, including Syria, until further notice.

“Resettlement places provided by every country are vital. The UN refugee agency [and] the International Organization for Migration hope that the US will continue its strong leadership role and long tradition of protecting those who are fleeing conflict and persecution,” the agencies state, adding that they remain committed to working with the US Administration towards the goal we share to ensure safe and secure resettlement and immigration programmes.

UNHCR and the IOM go on to express the strong belief that refugees should receive equal treatment for protection and assistance, and opportunities for resettlement, regardless of their religion, nationality or race.

“We will continue to engage actively and constructively with the US Government, as we have done for decades, to protect those who need it most, and to offer our support on asylum and migration matters,” the statement concludes. 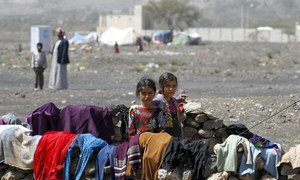 The number of people displaced from their homes due to conflict and persecution last year exceeded 60 million for the first time in United Nations history, a tally greater than the population of the United Kingdom, or of Canada, Australia and New Zealand combined, says a new report released on World Refugee Day today.