Senior United Nations relief officials today urged the Security Council to do more to ensure the support of the Syrian Government to deliver life-saving aid, warning that aid workers are “blocked at every turn” while some 4.6 million people live in hard-to-reach areas across the war-ravaged country.

“We continue to be blocked at every turn, by lack of approvals at central and local levels, disagreements on access routes, and by the violation of agreed procedures at checkpoints by parties to the conflict,” UN Emergency Relief Coordinator Stephen O’Brien told the Council in a briefing alongside senior officials from the World Food Programme and the World Health Organization.

He noted that “if one brave aid worker drives through the checkpoint without the facilitation letter and the command transmitted down the line” the guard or a sniper shoots.

“The fault is not at the door of the UN or the [non-governmental organizations] – it is the Syrian Government and the governors,” Mr. O’Brien said. “We need to be allowed to pass – not as a favour but as a right – and safely.”

In addition to millions of people living in hard-to-reach areas, an estimated 644,000 people live in 13 areas under siege in the country, according to the UN Office for the Coordination of Humanitarian Affairs (OCHA) which Mr. O’Brien heads.

While the figure is down from last year, “it should not be mistaken for progress,” the senior UN official stressed. He added that groups use sieges as weapons of war, which “does nothing other than to punish civilians, who already bear the brunt of this terrible conflict.” 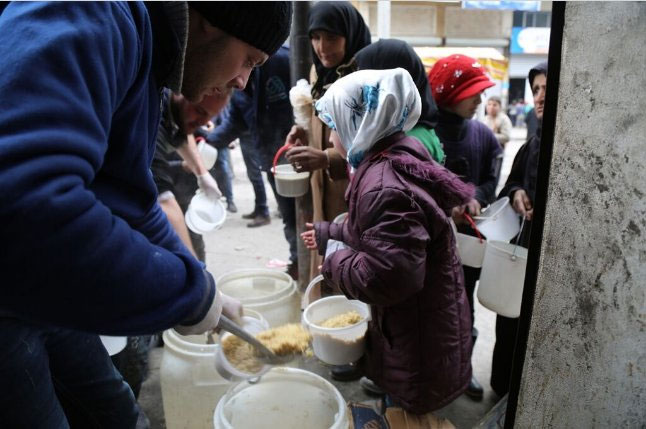 Mr. O’Brien also voiced deep concerns about reports of stockpiled aid in eastern Aleppo since the city’s evacuation, which OCHA is looking into. Such reports highlight the importance of unhindered aid not only for delivery but for monitoring and distribution of aid.

He said some seven million people in Syria are now food insecure and an additional two million are at risk. Food production has hit an all-time now, he said, as widespread insecurity hampers access to land and supplies, fuel is in short supply, and infrastructure is often damaged.

“Four in five Syrians now live in poverty with almost 80 per cent of households across the country struggle to cope with food shortages,” said Mr. Abdulla.

If nothing changes, Syria could become “a country of subsistence farmers with most of its commercial agriculture base eroded.”

Both UN aid officials also used today’s briefing to again call for a political solution to the crisis, underscoring the importance of the 8 February talks in Geneva to be held under UN auspices, and the UN conference with the European Union in the beginning of April.

“After a chronicle of missed opportunities, this is the time for the various parties to come together and bring an end to this horrendous chapter in Syria’s history,” Mr. O’Brien said.

Speaking by teleconference from Geneva, Peter Salama, Executive Director of the World Health Organization (WHO) Emergencies Programme, said that war has taken a serious toll on civilians and the health workers, hospitals and clinics serving them. Until recent security developments, 30,000 people had sustained war-related injuries every month, he recalled.

“The war has gutted the health system,” with more than 100 attacks launched against health centres in 2016 alone, he said, adding that it has led to acute shortages and blocked access to services. Half of all Syrian children were not receiving the required vaccinations and more than 300,000 pregnant women lacked the care they need.

Underscoring the importance of the safety of those providing such services, he said WHO is working to ensure access to besieged and hard-to-reach areas, and an end to attacks on health workers, with perpetrators being held accountable. Moving forward, Syria’s health system must be rebuilt, with strong support from the international community, he emphasized.