“The failure to investigate and sanction aggressors has signalled a dangerous message that there are no consequences for committing such crimes. This creates an environment conducive to repetition of violations,” warned Michel Forst, the UN Special Rapporteur with a mandate to monitor and report on the promotion and protection of defenders in the world.

Mr. Forst visited Mexico from 16 to 24 January 2017, crisscrossing from Mexico City to the states of Chihuahua, Guerrero, Oaxaca and State of Mexico. He met with more than 800 human rights defenders from 24 states, 60 per cent of whom were women.

Noting the “elevated levels of insecurity and violence facing them in the country” in the complex context of organized crime, corruption in the country, and State repression, he warned that “impunity has become both the cause and the effect of the overall insecurity of human rights defenders in Mexico.”

“Impunity feeds criminalization of defenders, which in turn fuels fear among broader civil society, undermining the general aspirations for human rights and the rule of law,” said Mr. Forst in a news release issued by the Office of the UN High Commissioner for Human Rights (OHCHR). “For human rights defenders, the best protection they could have is when justice is served and perpetrators are held accountable.”

On the final day of his visit, the expert delivered a preliminary report with a series of recommendations to the Mexican authorities and other actors to improve the protection of human rights defenders and enable their important work.

“Only by joining efforts will Mexico be able to overcome the serious situation in which defenders are carrying out their work, which is core to a democratic society,” he stressed. 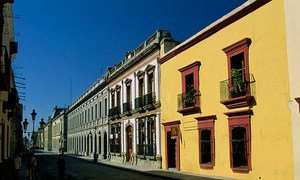 Concluding a ten-day visit to Mexico, the United Nations Subcommittee on the Prevention of Torture urged the authorities to redouble its efforts to fight impunity and to immediately adopt the General Law on Torture, in full conformity with relevant international standards.