WFP/Photolibrary
Supplies for Deir ez-Zor, Syria, are dropped from a height of 5,000 metres.
23 January 2017

The United Nations Children's Fund (UNICEF) today called for unimpeded and unconditional access to children in the besieged city of Deir ez-Zor, noting that they have not received regular humanitarian aid for more than two years.

“UNICEF calls on all parties to the conflict in Syria to immediately lift all sieges and allow unimpeded and unconditional access to children in Deir ez-Zor and in all the 15 areas under siege across the country,” said Geert Cappelaere, UNICEF's Regional Director, in a statement.

According to UNICEF, children in Deir ez-Zor have come under intense attack in the past week, and indiscriminate shelling has reportedly killed scores of civilians and forced others to remain in their homes. The escalation of violence threatens the lives of 93,000 civilians, including over 40,000 children who have been cut off from regular humanitarian aid for over two years.

In addition, food prices have skyrocketed to levels five to ten times higher than in the capital, Damascus, and chronic water shortages are forcing families to fetch untreated water from the Euphrates River, exposing children to the risk of waterborne diseases.

“Nothing justifies the use of siege and the untold suffering that it unleashes on children. The children of Syria have already paid the highest price for a war that is not of their making,” Mr. Cappelaere said. 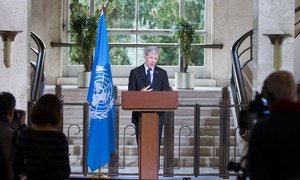