Urging all Gambian parties to respect the outcome of the 1 December election recognizing Adama Barrow as the country’s President-elect, the United Nations Security Council today expressed its support for the commitment of West African States to “ensure, by political means first, respect of the will of the people.”

Amid a political standoff over Gambia’s presidency – Mr. Barrow is reportedly expected to be sworn in later today at the Gambian embassy in neighbouring Senegal even as incumbent Yahya Jammeh refuses to step down – the Council unanimously adopted a resolution expressing grave concern at the risk of deterioration of the situation.

The Council strongly condemned former President Jammeh’s 9 December statement rejecting the official election results and the takeover of the Independent Electoral Commission by the Gambian Armed Forces on 13 December 2016, as well as the attempt by the Parliament on 18 January 2017 to extend President Jammeh’s term for three months beyond his current mandate, which ends today.

Against this backdrop, the Council strongly condemned the attempts to usurp the will of the people and undermine the integrity of the electoral process in Gambia. It also condemned the attempt to prevent a peaceful and orderly transfer of power to President Barrow by declaring a state of emergency.

Endorsing the decisions of Economic Community of West African States (ECOWAS) and the African Union (AU) to recognize Mr. Barrow as the President of Gambia, the 15 nation Council called upon the countries in the region and the relevant regional organization to cooperate with him in his efforts to realize the transition of power.

The Council also requested the Gambian defence and security forces to demonstrate “maximum restraint” to maintain an atmosphere of calm in country, and stressed “their duty and obligation to place themselves at the disposal of the democratically elected authorities.”

The text further commends and strongly supports continued efforts of the AU and ECOWAS to promote peace and stability in the region. By the text, the Council requests for the Secretary-General to update the body on the resolution’s implementation within 10 days.

Earlier today, Secretary-General António Guterres called President Barrow to discuss the latest developments in the country and to congratulate him on his inauguration.

According to a statement issued by Mr. Guterres’ spokesperson, the Secretary-General expressed deep concern about the refusal of outgoing President Yahya Jammeh to step aside and about the high outflow of Gambians into Senegal.

“The Secretary-General told President Barrow of his full support for his determination, and ECOWAS’s historic decision, with the unanimous backing of the Security Council, to restore the rule of law in The Gambia so as to honour and respect the will of the Gambian people,” said the statement.

Mr. Guterres also conveyed the readiness of the UN system to support President Barrow and his government in their efforts to promote democracy and achieve sustainable development in Gambia. 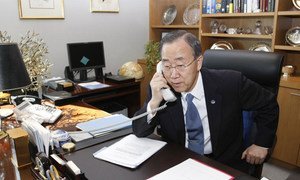 Secretary-General Ban Ki-moon today called Adama Barrow, the President-elect of Gambia, to congratulate him on his electoral victory and to reiterate the commitment of the United Nations to support a peaceful, timely, and orderly transfer of power.