More than 40 per cent of Syrian refugee children in Turkey are missing out on education, despite a sharp increase in enrolment rates, the United Nations Children's Fund (UNICEF) said today.

“Unless more resources are provided, there is still a very real risk of a 'lost generation' of Syrian children, deprived of the skills they will one day need to rebuild their country,” said UNICEF Deputy Executive Director Justin Forsyth, speaking after a visit to southern Turkey.

According to UNICEF, nearly half a million Syrian refugee children are currently enrolled in schools across Turkey. But over 40 per cent of children of school-going age – or 380,000 child refugees – are still missing out on an education, despite a more than 50 per cent increase in enrolment since last June.

“For the first time since the start of the Syrian crisis, there are more Syrian children in Turkey attending class than there are out of school,” said Mr. Forsyth. “Turkey should be commended for this huge achievement.” Diversity ‘is richness, not a threat,’ UN chief Guterres tells forum on combatting anti-Muslim discrimination

Turkey is home to more than 1.2 million child refugees, making it the top child refugee hosting country in the world.

AUDIO: UNICEF's Najwa Mekki says despite the Turkish government doing "a fantastic job" providing places for Syrian refugee children in Turkey, thousands have no access to a classroom.

In partnership with the Government of Turkey, UNICEF is helping strengthen education systems, increase access to learning and improve the quality of inclusive education for Syrian and vulnerable Turkish children.

Efforts are also under way to include Syrian children in a national programme that grants cash allowances to vulnerable families for them to send, and keep, their children in school. 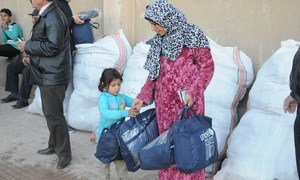