Briefing the United Nations Security Council on its resolution 2231, which endorsed a plan of action on Iran’s nuclear programme, the top UN political official called on the international community for continued support and contribution to the implementation of the agreement.

Briefing the United Nations Security Council on its resolution 2231, which endorsed a plan of action on Iran’s nuclear programme, the top UN political official called on the international community for continued support and contribution to the implementation of the agreement.

“[The UN] has not received any report, nor is aware of any open source information regarding the supply, sale or transfer to Iran of nuclear-related items undertaken contrary to the provisions of the resolution,” said Under-Secretary-General for Political Affairs Jeffrey Feltman.

“On an encouraging note, [UN] Member States have made greater use of the procurement channel process through which the transfer of nuclear-related items is approved by the Council on the basis of recommendation provided by the Joint Commission,” he added, noting that since July last year, five new requests were submitted through the channel, three of which were approved while two were under consideration.

In his briefing, Mr. Feltman told the Council that the no information was received regarding Iranian ballistic missile activities or ballistic missile-related transfers to the country undertaken contrary to the relevant provisions of the resolution.

On the third issue – arms-related transfer – the UN official pointed to the information, contained in the report, on the seizure of an arms shipment by the French Navy in the northern Indian Ocean in March last year, as well as another arms seizure off the coast of Oman, in February 2016, by the Royal Australian Navy. He noted that seizures bore “strong similarities” to a seizure reported in June 2016 (and contained in the previous report of the Secretary-General).

“[We] look forward to the opportunity to examine the arms seized in all three instances and obtain additional information in order to corroborate the information provided and independently ascertain the origin of these shipments,” said Mr. Feltman.

He also raised particular concern over a televised statement by a top Hizbollah official that it receives its salaries, expenses, weapons and missiles from Iran.

Further, Mr. Feltman informed Council members of Iran’s participation in an arms exhibit in Iraq’s capital, Baghdad, in March 2016, and that that all items exhibited were returned to Iran.

Adopted unanimously in July 2015, resolution 2231 endorsed the Joint Comprehensive Plan of Action (JCPOA) that was signed earlier that month by the five permanent members of the Council (China, France, Russia, the United Kingdom and the United States), plus Germany, the European Union (EU) and Iran. The agreement set out a rigorous monitoring mechanism and timetable for implementation, while paving the way for the lifting of UN sanctions against Iran. 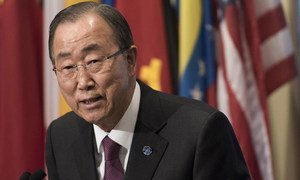 United Nations Secretary-General Ban Ki-moon today said that the nuclear deal agreed to last year by Iran and six world powers is the best way of ensuring the exclusively peaceful nature of Iran’s nuclear programme, calling for the comprehensive implementation of the accord, as well as a subsequent Security Council resolution that endorsed it.