The United Nations World Food Programme (WFP) said today that it has been forced to suspend airdrops to residents of the besieged Syrian city of Deir ez-Zor because of heavy fighting between Government forces and the Islamic State of Iraq and the Levant (ISIL/Da'esh).

“There is heavy fighting going on in and around the landing zone and in the parts of the city where the food distributions are taking place," said WFP spokesperson Bettina Luescher as she informed reporters in Geneva that the airdrops had been suspended as of Sunday. Airdrops require a large and completely safe drop zone area where cargo is released and collected by a team on the ground for delivery.

Stressing that partners on the ground could not expose the lives of the 60 volunteers who were in that open landing zone and would receive the supplies and distribute them, she said: “It is too precarious for the moment to continue the operation. WFP needs to make sure the volunteers are safe.”

Ms. Luescher said that WFP has conducted 177 airdrops into Deir ez-Zor since April. The agency has provided nearly 3,300 metric tonnes of food and other aid, including supplies from other relief organizations, for the 110,000 residents of the city. Responding to questions she stated that because air drops could only deliver small amounts, they need to be done on an almost continuous basis.

Meanwhile, the United Nations reports that water remains cut off from Ain El Fijeh, depriving 5.5 million people in Damascus and surrounding areas from their main water source since 22 December.

The Syrian Arab Red Crescent and water authorities' technical teams, who suspended their mission following a security incident, remain on stand-by to enter the area again to complete their mission as soon as security conditions allow. The UN stands ready to provide additional support to ensure the swift repair of the water infrastructure, a UN spokesperson added. 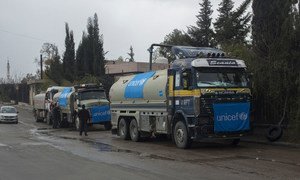 While the ceasefire in Syria is largely holding, the United Nations envoy for the country cautioned today that the truce may be under threat as clashes in villages in the Wadi Barada valley have damaged water infrastructure and left more than five million people in and around Damascus facing water shortages.