16 January 2017
The United Nations refugee agency praised the Italian Coastguard in coordination with Frontex, the European Border and Coast Guard Agency, for rescuing some 1,500 people from boats on the Mediterranean struggling in rough weather throughout the weekend.

“In what is already a tragic start to 2017 on the Mediterranean Sea, I am really heartened to see the first priority of saving lives in action through the rescue efforts of the Italian Coastguard and Frontex who have braved such extreme weather to rescue so many people,” said Vincent Cochetel, Regional Refugee Coordinator for the Refugee Crisis in Europe.

In the wake of at least one known shipwreck of an over-crowded and flimsy vessel off the coast of Libya, at least eight bodies were recovered by European authorities. According to the Italian Coast Guard, on Saturday a French ship operating under Frontex sighted and rescued four people on the high seas 30 to 40 miles, or between 48 and 64 kilometres, from Libyan shores.

“The survivors – whether refugees or migrants – have gone through unimaginable physical and psychological suffering,” said Cochetel, adding that UNHCR will work closely with authorities to refer them to health services.

Early reports from survivors say that at least 100 people were on board a dinghy that collapsed off the Libyan coast – between Tripoli and Misurata. That same day, the Italian Coastguard rescued another 34 people close to oil platforms some 55 miles (88 kilometres) from the Libyan coast.

Italian authorities also reported that three survivors from another rescue operation had died from hypothermia, while another two were suffocated on board a dinghy.

Survivors and victims from recent rescue efforts have disembarked in Lampedusa on Saturday and in the port city of Messina, on the north east coast of Sicily, on Sunday.

UNHCR staff assisted during both the operations and mourning of the victims.

Last year was the deadliest year on record on the Mediterranean Sea with more than 5,000 deaths recorded – as compared to the 3,771 documented in 2015.

The deadly start to 2017 highlights the urgent need for States to increase pathways for admission of refugees, such as resettlement, private sponsorship and family reunification, so they do not have to resort to dangerous journeys and the use of people smugglers. 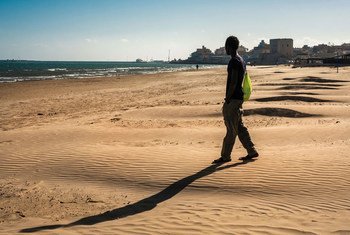 14 January 2017
Noting that the number of children arriving in Italy by themselves via the sea in 2016 more than doubled over the previous year, the United Nations Children’s Fund (UNICEF) today called for urgent and special measures to protect them from trafficking, exploitation and abuse.